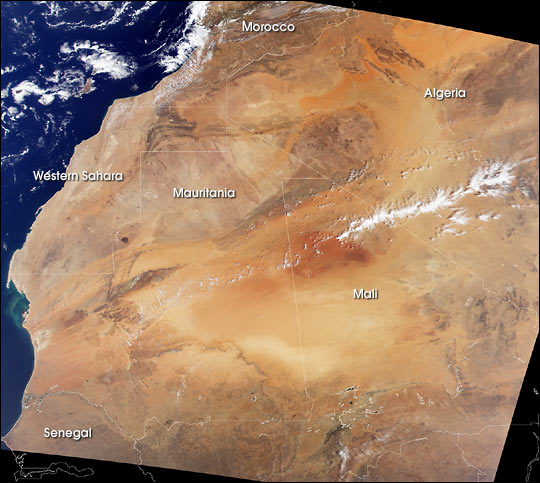 With its vast expanses of sand, framed by mountain ranges and exposed rock, northwestern Africa makes a pretty picture when viewed from above. This image was acquired by the Moderate-resolution Imaging Spectroradiometer (MODIS), flying aboard NASA's Terra spacecraft. The Canary Islands can be seen on the left side of the image just off Africa's Atlantic shore. The light brown expanse running through the northern two thirds of the image is the Sahara Desert. The desert runs up against the dark brown Haut Atlas mountain range of Morocco in the northwest, the Atlantic Ocean to the west and the semi-arid (light brown pixels) Sahelian region in the South.

The Sahara, however, isn't staying put. Since the 1960s, the desert has been expanding into the Sahelian region at a rate of up to 6 kilometers per year. In the 1980s this desert expansion, combined with over cultivation of the Sahel, caused a major famine across west Africa. Over the summer months, strong winds pick up sands from the Sahara and blow them across the Atlantic as far west as North America, causing air pollution in Miami and damaging coral reefs in the Bahamas and the Florida Keys.