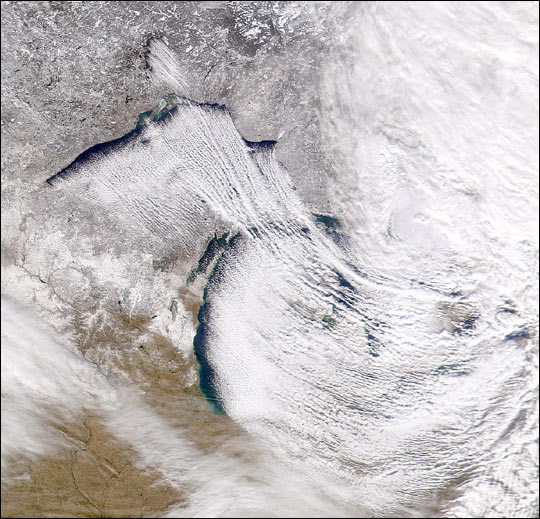 The lake effect is particularly clear in this Sea-viewing Wide field-of-view Sensor (SeaWiFS) true-color image of the North American Great Lakes region, acquired December 5, 2000. Lakes Nipigon, Superior, and Michigan show striking contrasts between clear and cloudy air as the wind blows from the northwest across the lakes.

As it flows across the relatively warm lakes, the cold dry air gathers heat and moisture from the surface. The warm moist air rises into the atmosphere and mixes vigorously with the cold dry air above. The layer of warm moist air deepens as it travels across the lake. Some of the evaporated water from the lake condenses into streamers of fog rising from the surface, while much of the moisture condenses to form a stratocumulus cloud in the upper half of the mixed layer.

The cloud-forming water droplets may freeze into ice crystals and, due to accumulated water deposition over time, grow into snowflakes. This process can generate snowstorms that produce significant amounts of snowfall downwind. It is not uncommon for lake effect snowstorms to produce as much as two feet of snow within a 24-hour period in northwestern parts of New York and Pennsylvania.

Steam Fog over the Great Lakes

When a blast of cold air passed over the relatively warm waters of Lake Michigan and Lake Superior, the contrast in temperature caused steam fog to roll off the surface of the lakes.

Image of the Day Atmosphere Water Sea and Lake Ice