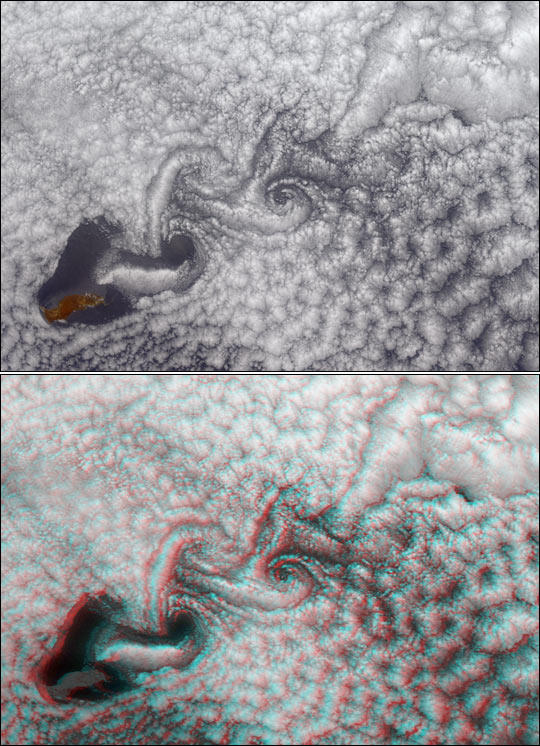 These Multi-angle Imaging Spectroradiometer (MISR) images from June 11, 2000 demonstrate a turbulent atmospheric flow pattern known as the von Karman vortex street. This phenomenon is named after aerodynamicist Theodore von Karman, who theoretically derived the conditions under which it occurs. The alternating double row of vortices can form in the wake of an obstacle, in this instance the eastern Pacific island of Guadalupe. The rugged terrain of this volcanic Mexican island reaches a maximum elevation of 1.3 kilometers. The island is about 35 kilometers long and is located 260 kilometers west of Baja California.

The vortex pattern is made visible by the marine stratocumulus clouds around Guadalupe Island. The upper image is a color view obtained by MISR's vertical- viewing (nadir) camera. North is toward the left. The orientation of the vortex street indicates that the wind direction is from lower left to upper right (northwest to southeast). The areas within the vortex centers tend to be clear because the rotating motions induce a vertical wind component that can break up the cloud deck.

The lower view is a stereo picture generated from data acquired by MISR's fore- and aft-viewing 70-degree cameras. A 3-D effect is obtained by viewing the image with red/blue glasses and placing the red filter over your left eye. Note how the downwelling atmospheric motion (change in elevation from high to low) is accompanied by a clearing in the center of the first vortex. As the vortices propagate downstream, their rotational velocities weaken. As a consequence, the induced vertical motion and cloud-clearing effect weakens as well.

Theodore von Karman was a Professor of Aeronautics at Caltech and Director of Caltech's Guggenheim Aeronautical Laboratory from 1930-1949. He was one of the principal founders of the Jet Propulsion Laboratory.

A Vortex Street in the Arctic