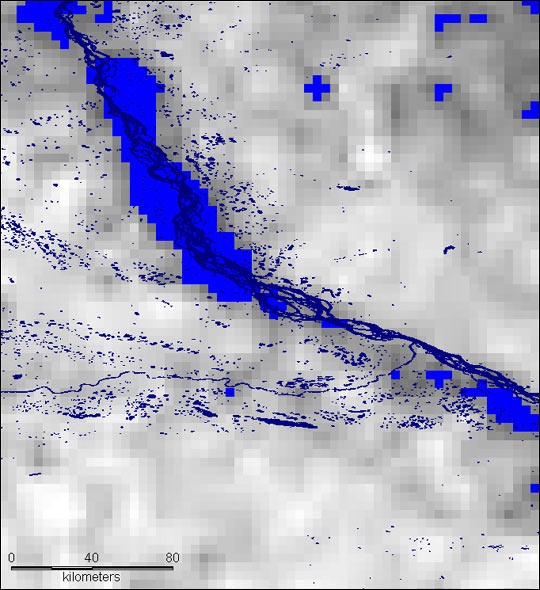 Nearly every year in the late spring, ice blocks the flow of water at the mouth of the Lena River in northeastern Russia and gives rise to floods across the Siberian plains. The image above is a flood map of the river created by the Dartmouth Flood Observatory. The dark blue in the image demarcates the river, which was mapped using data from the MODIS (Moderate Resolution Imaging Spectroradiometer) instrument aboard NASA’s Terra satellite. The floods, which are depicted in a lighter blue, were mapped using data from the SeaWinds instrument aboard NASA’s QuikSCAT satellite. (The large imaged accessed by the link above and to the right was constructed using data from satellite instruments other than SeaWinds.)

The Lena River, which is Russia’s longest, flows 2,641 miles (4,250 kilometers) south to north through Siberia and into the Laptev Sea. In the winter, the river becomes nearly frozen. In the spring, however, water upstream thaws earlier than water at the mouth of the river. As the southern end of the river begins to melt, blocks of ice travel downstream to the frozen delta, pile up, and obstruct the flow of water. Flooding doesn’t always occur on the exact the same parts of the river every each spring. The floods hit further south last year. If the flooding grows severe enough, explosive charges are typically used to break up the ice jams.

This is the first time QuikSCAT/SeaWinds has been used to map a flood. The satellite, which sends out high frequency radio waves to detect the frothiness of water, was originally designed to measure wind speed and direction near the surface of the ocean. By employing it on floodwaters, scientists at the Dartmouth Flood Observatory hope to obtain much more accurate and timely measurements of the extent of floods around the world. The group, led by Robert Brakenridge, is constructing a worldwide atlas of flood maps such as these in order to outline the extent of the world’s flood plains. The idea is that if people are aware of where flood plains exist, they could then avoid building or settling on them.