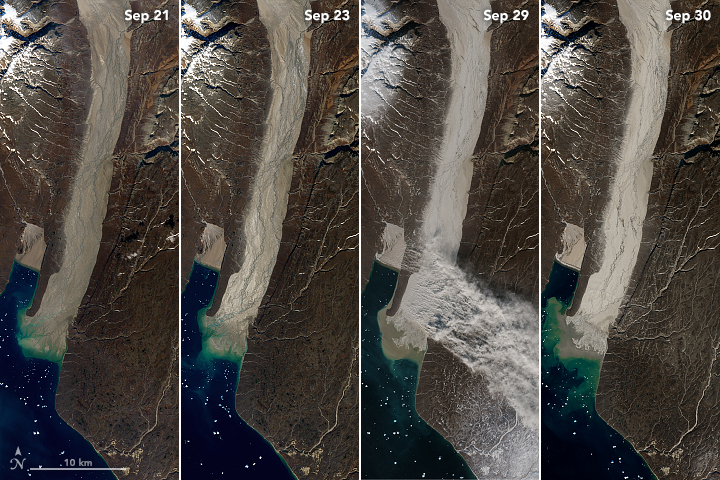 Dust is probably the last thing that comes to mind when you think about Greenland, an island mostly covered by ice.

Though Greenland’s dust events are nothing like the massive clouds of dust and sand that can darken skies over the Sahara Desert for days, winds in Greenland are occasionally strong enough to send plumes of sediment streaming from dried-out lakes, river valleys, and outwash plains along the coasts. The dust in Greenland is mainly glacial flour, a fine-grained silt formed by glaciers grinding and pulverizing rock.

For more than a century, researchers have sporadically reported high-latitude dust events in expedition logs and scientific publications. But only during the past decade have scientists attempted to study them systematically. The Arctic and high-latitudes can be tough to study even with satellites, and a recent study noted a dearth of Greenland dust observations.

No longer. The Moderate Resolution Imaging Spectroradiometer (MODIS) on NASA’s Terra satellite and a sensor on the European Space Agency’s Sentinel-2 collected imagery on September 29, 2018, of a sizable silt plume streaming from Greenland’s east coast. The source was a braided stream valley about 130 kilometers (80 miles) northwest of Ittoqqortoomiit, a village at a latitude of 73 degrees North. That puts the village north of the northern coast of Alaska.

The series of Landsat and Sentinel 2 images above and below—captured on September 21, 23, 29, and 30—shows the floodplain where the stream flows into Scoresby Sound. As the soil on the floodplain dried out (first two images), the floodplain became increasingly gray. Northwesterly winds on September 29 were strong enough to lift glacial flour into the air. 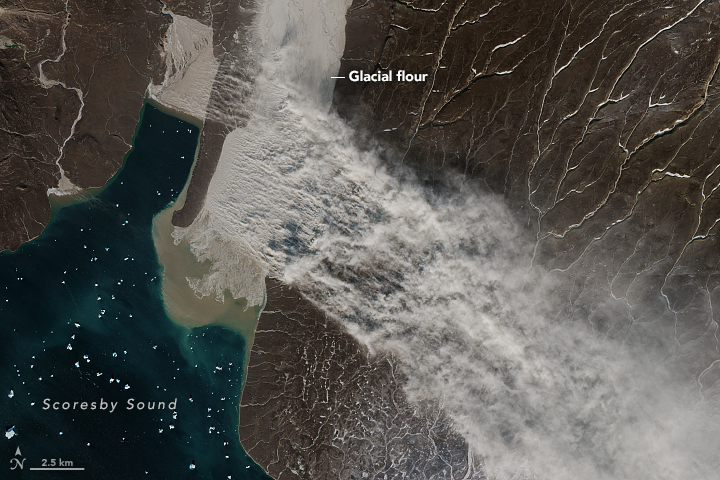 “This is by far the biggest event detected and reported by satellites that I know about,” said Santiago Gassó, an atmospheric scientist at NASA’s Goddard Space Flight Center. He first noticed the storm on October 3.

“We have seen a few examples of small dust events before this one, but they are quite difficult to spot with satellites because of cloud cover,” said Joanna Bullard of Loughborough University. “When dust events do happen, field data from Iceland and West Greenland indicate that they rarely last longer than two days.”

The glacial flour was likely made by several glaciers farther up the valley, then carried south by meltwater streams and deposited in the floodplain. As stream water levels dropped in autumn, the floodplain dried out and became susceptible to scouring by the wind. In this case, Bullard noted, the winds were triggered by the combination of a low-pressure system crossing the Greenland ice sheet followed closely by a ridge of high pressure.

Since high-latitude dust events are poorly understood, they are typically not included in atmospheric and climate models. Gasso hopes that eventually they will be included because they could have effects on air quality, the reflectivity of snow, and even marine biology.

Satellites captured a rare image of a plume of dusty glacial flour streaming from eastern Greenland.