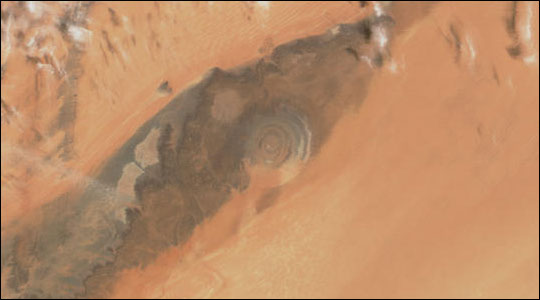 This prominent circular feature in the Sahara Desert of Mauritania has attracted attention since the earliest space missions because it forms a conspicuous bull’s-eye in the otherwise rather featureless expanse of the Gres de Chinguetti Plateau in central Mauritania, northwest Africa. Described by some as looking like an outsized ammonite in the desert, the structure [which has a diameter of almost 50 kilometers (30 miles)] has become a landmark for space shuttle crews. Initially interpreted as a meteorite impact structure because of its high degree of circularity, it is now thought to be merely a symmetrical uplift (circular anticline) that has been laid bare by erosion. Paleozoic quartzites form the resistant beds outlining the structure. The reason for the high degree of circularity is not clear.

This true-color scene was acquired by the Moderate-resolution Imaging Spectroradiometer (MODIS), flying aboard NASA’s Terra satellite, on March 11, 2002. 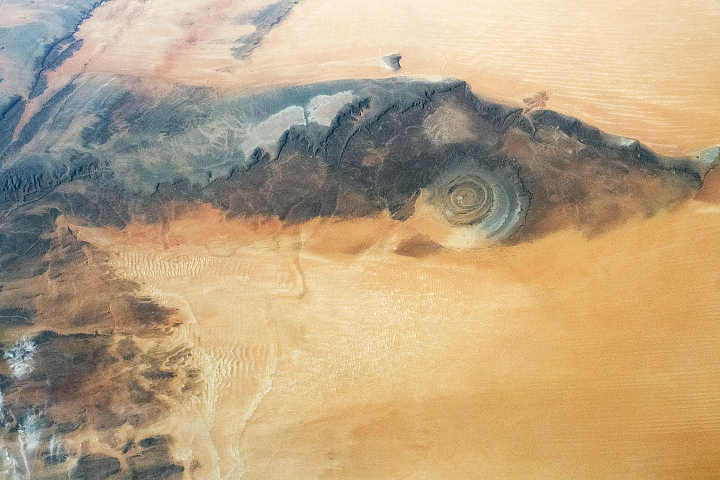 The Eye of Sahara

The Richat Structure in Mauritania is not what you think it is.