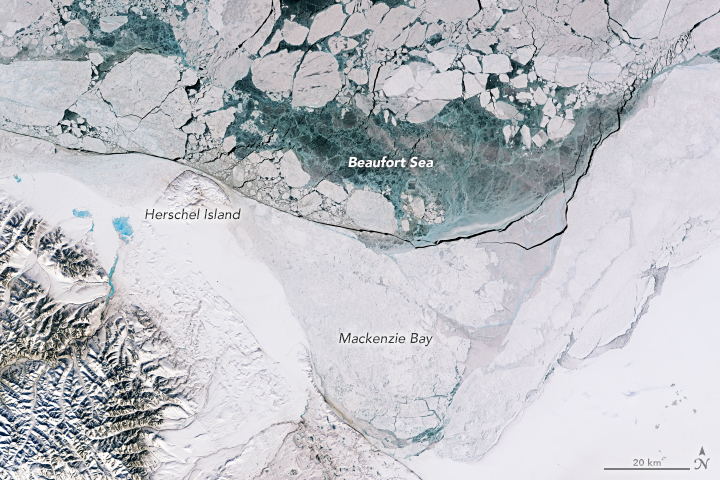 In February 2018, the average extent of sea ice in the Arctic was the lowest of any February on record, thanks to a winter warming event. Then, on March 17, 2018, Arctic sea ice extent reached its annual peak; it was the second-lowest maximum on record.

By the time this image was acquired in mid-April, springtime sunlight and warmth had advanced the melting to produce some beautiful patterns and textures in the Beaufort Sea, north of Canada. The natural-color image was acquired by the Operational Land Imager (OLI) on Landsat 8 on April 15, 2018. A small part of the image (lower right) was mosaicked in from an April 17 image in order to show more of Mackenzie Bay. In the days before this image was acquired, the region experienced an extended period of generally sunny days, allowing ample sunlight to reach the ice and melt its surface. The thinnest ice appears blue-gray.

The favorable weather was a boon for NASA’s Operation IceBridge, an airborne mission now in its tenth year making flights over the Arctic. Clear skies meant ample data could be collected by instruments on P-3 research plane when it flew over sea ice in the eastern Beaufort Sea on April 14.

“The main purpose of these IceBridge flights is to measure the thickness of the sea ice,” said IceBridge project scientist Nathan Kurtz. “Ice thickness is an important factor which allows us to assess the health of the pack and its ability to survive the summer melt. It is also an important regulator in the exchange of energy and moisture between the ocean and the atmosphere.”

Sea ice appears static when we view a single satellite image, but in fact, it is almost constantly in motion. The ice pack in the open sea is pushed around by winds and currents, and this fractures it into smaller pieces that are more vulnerable to melting. The animation above, composed of images acquired by NASA’s Moderate Resolution Imaging Spectroradiometer (MODIS) instrument on the Terra and Aqua satellites between April 4 and 15, captures that motion. Some areas appear to open up and then refreeze. Note how the fast ice—which is still anchored to the shore and more resistant to winds and currents—appears less fractured. 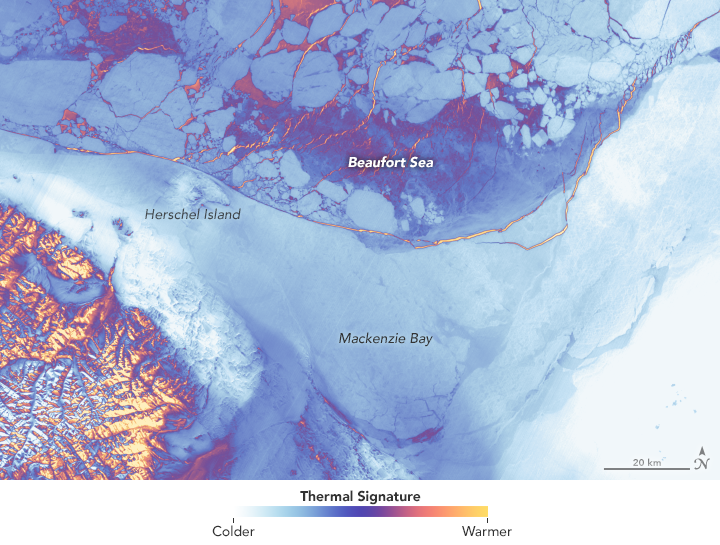 As the sea ice thins and fractures, you can also see that warmth is also coming from ocean water below the ice. The Thermal Infrared Sensor (TIRS) on Landsat 8 captured the data for this false-color image on April 15 and 17. It shows the relative warmth or coolness of the landscape. Orange depicts where surfaces are the warmest—areas of open ocean or thin sea ice. Light blues and whites are the coldest areas, which includes the fast ice and the larger, thicker floes.

This visual array of thicknesses, textures, and motion in the sea ice are a striking example of Earth’s beauty that few people get to witness. “As scientists, we have the privilege of witnessing the beauty and mystery of the cryosphere firsthand, even as we work to collect that data,” said IceBridge mission scientist John Sonntag. “Often I look out from the windows of our aircraft and see features that I don’t immediately understand, but one of my colleagues in the global community of cryospheric scientists can usually explain the processes behind them.”

“While on the flights, I’ll stare out the windows for hours looking at the surface. The movement of the ice leads to huge variability over small scales, with many interesting scenes and patterns visible and a variety of color shades,” Kurtz added. “But there’s only so much that can be discerned with human eyes. That is why we have the sensitive instrument suite on the plane: to map the intricacies of the ice cover which may otherwise be invisible to us and to quantify parameters for scientific interpretation.”