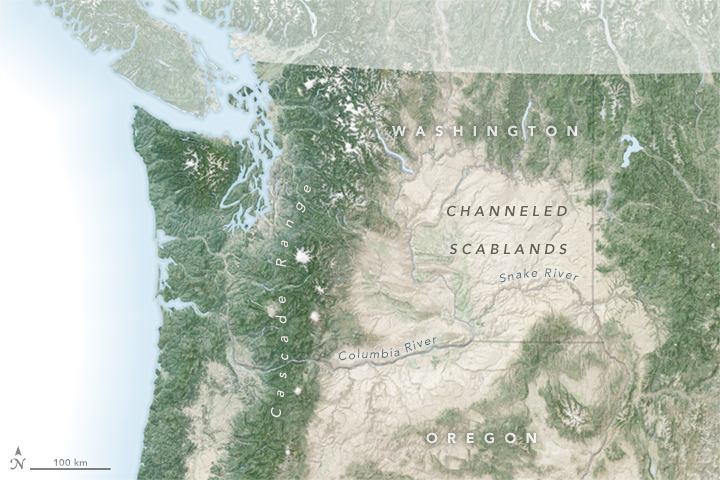 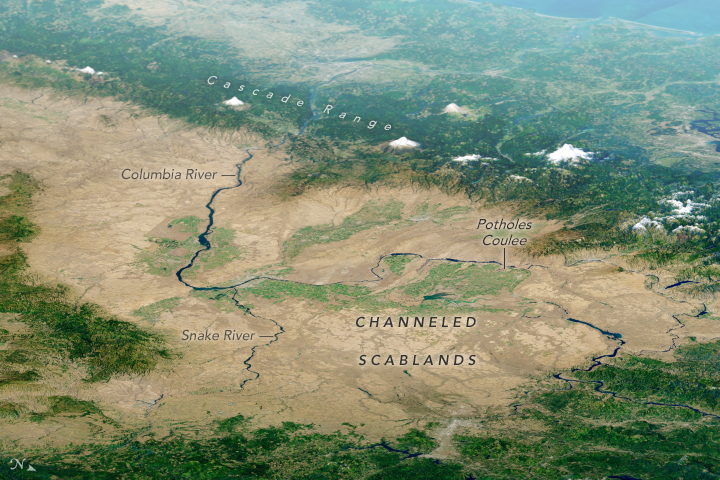 To the non-geologist, the landforms on the Columbia Plateau in eastern Washington might look more like another planet than Earth. Boulders lie strewn across the landscape, amid towering cliffs and plunging holes. Winding channels scar the bedrock. Through the eyes of a geologist, however, the landforms of the so-called Channeled Scablands reveal a past punctuated by violent floods.

The network of channels is visible in a natural-color image (below the map) derived from the Operational Land Imager (OLI) on Landsat 8. The image is a “best-pixel mosaic,” which means it is composed of small parts of many images captured between 2013 and 2018. The technique makes it possible to strip away clouds and haze. The mosaic was then draped over data from NASA’s Shuttle Radar Topography Mission (SRTM) to show the topography.

The channels appear dark brown compared to lighter surrounding areas, but they are not wet. (The water-filled Snake and Columbia Rivers are much darker by comparison.) Instead, these channels take on a dark color because the overlying loess has been eroded, exposing underlying volcanic basalt.

The massive prehistoric floods that eroded this landscape were not always obvious to scientists. Geologist J Harlen Bretz described in 1923 how water could have sculpted the features. “The channeled scablands are the erosive record of large, high-gradient, glacier-born streams,” he wrote in a research paper. He added: “The magnitude of the erosive changes wrought by these glacial streams is nothing short of amazing.” But for decades, his explanation remained controversial.

Scientists have since gained an even better understanding of the events that took place during the last Ice Age 10,000 to 20,000 years ago. As the edge of the Cordilleran ice sheet advanced southward, it formed an ice dam rising about 600 meters (2,000 feet) high along the Clark Fork River. Glacial Lake Missoula grew behind the ice dam and ultimately contained as much water as Lake Erie and Lake Ontario combined. When the dam broke, more than 500 cubic miles of water tore across the region at about 80 miles per hour. The dam grew and broke several times, and the repeated flooding carved out grooves, potholes, and the long channels known as “coulees.” 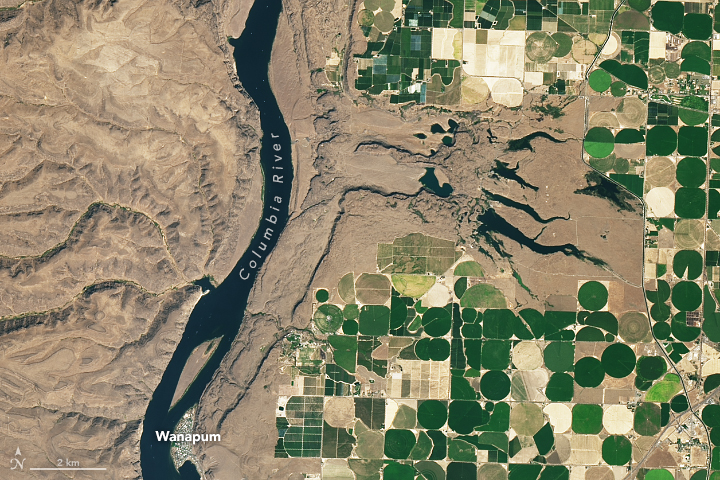 On September 2, 2017, the OLI on Landsat 8 acquired this detailed image of Potholes Coulee. This horseshoe-shaped canyon was formed when floodwaters dropped more than 260 meters (850 feet) in less than 5 kilometers (3 miles) from the Quincy Basin to the Columbia River Valley, stripping away topsoil and eroding the basalt. In modern times, irrigation networks that pull water from the Columbia River have made agriculture productive in places where this rich soil remains.

The landforms on the Columbia Plateau in eastern Washington reveal a past punctuated by violent floods.

This natural-color image shows Grand Coulee Dam on the Columbia River in Washington, as well as the large area of cropland irrigated by the reservoir upstream.