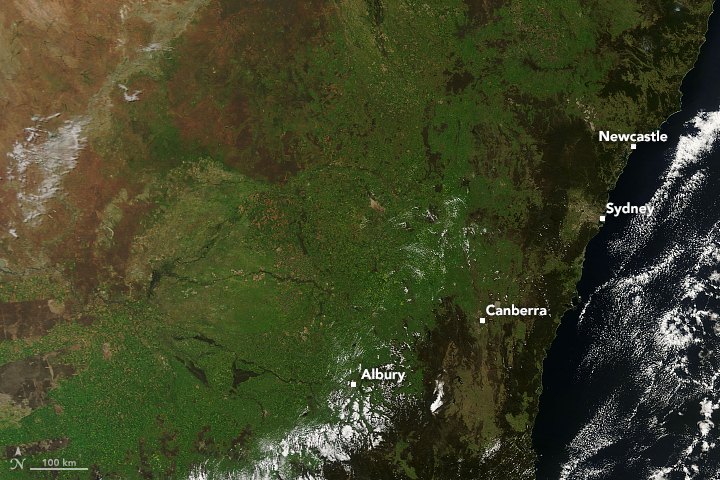 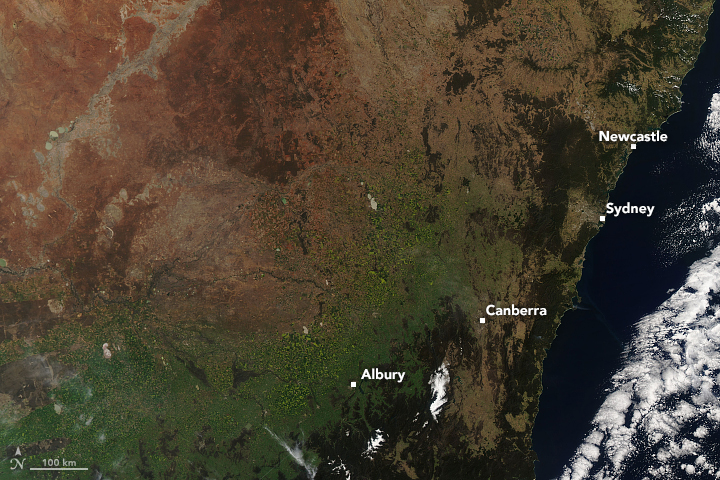 Australia just finished one of its warmest and driest winters on record, and September has brought unseasonably warm temperatures for the early spring. The stress of that heat and dryness is visible from space.

These natural-color images show the browning of the landscape in New South Wales. The first image was acquired last year (September 28, 2016) by the Moderate Resolution Imaging Spectroradiometer (MODIS) on NASA’s Terra satellite. The second image was acquired by the MODIS instrument on NASA’s Aqua satellite on September 17, 2017.

According to a report issued by the Australian Bureau of Meteorology, mean maximum temperatures (daytime) were the highest for any winter since records were first kept in 1910. Average daily high temperatures were 1.9 degrees Celsius (3.5°Fahrenheit) above normal for the June through August period. The overall winter mean temperature—which includes highs and lows, days and nights—was the fifth-warmest on record. The warm winter was most dramatic in the northern half of the country.

Parts of the country such as New South Wales (NSW) likely had weather whiplash, as daytime highs were well above normal but nighttime lows were below normal. NSW had its third hottest overall winter, yet its coldest nighttime average since 1997. Frosts were hard and frequent throughout the winter even as daytime temperatures soared.

Winter rainfall totals were the ninth-lowest on record nationally, and the lowest since 2002. June 2017 was the driest June in the national record books, and nearly 200 stations set new monthly or seasonal lows for winter rain. In New South Wales, precipitation was 49 percent below the long-term mean. In September, farmers told the Australian Broadcasting Corporation of heat stressed plants on many vegetable farms, and agriculture monitors predicted the worst wheat and canola crops in at least seven years.

Government meteorologists offered some possible causes: “The subtropical ridge was both stronger, and further south, than usual for this time of year, and the Southern Annular Mode was in a positive phase, leading to fewer rain-bearing low pressure systems and cold fronts affecting southern Australia and reducing cloudiness over land.”

A combination of very warm days, unusually frosty nights, and little rainfall have turned the landscape brown for the start of spring.