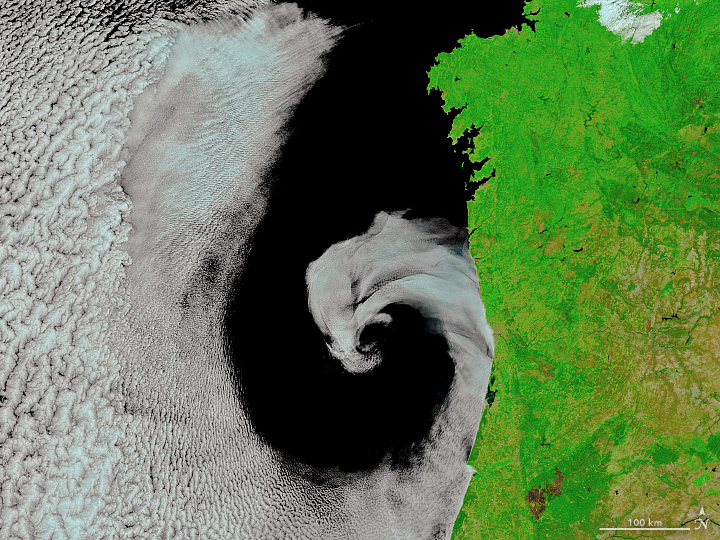 Cyclones that form over Earth’s mid-latitudes—like the storm that swirled over the United States in 2010—are often memorable for the wind, rain, and tornadoes they can spawn. But not every one of these low-pressure systems delivers severe weather.

On July 16, 2017, the Moderate Resolution Imaging Spectroradiometer (MODIS) on NASA’s Terra satellite captured this image of cyclonic rotation off the coast of Portugal. It is possible that the clouds were not even producing rain, but they still make for a striking image. This image was composed with visible and infrared light (MODIS bands 7-2-1), a combination that highlights the contrast between clouds and land.

In the vicinity of the Iberian Peninsula, these low-pressure systems are relatively slow-moving and tend to be poorly developed in summer; they often form clouds without any precipitation. In contrast, fast-moving systems dominate in winter; they are more developed, and are often linked to heavy rain and stronger winds.

“A slow-moving cyclone over the Portuguese coast sucked in dry, cloud-free air from the Iberian Peninsula and moist, cloudy air from the Atlantic, forming a spiral,” said Peter Knippertz, a meteorologist at Karlsruhe Institute of Technology. He notes that the clouds wrapped up in the circulation appear to be marine stratocumulus.

Hot, dry continental areas typically see lower pressure (thermal lows) than the nearby ocean. Sometimes these thermal lows become mobile and move offshore. When the image was acquired, there was a particularly strong contrast between North Atlantic and continental Europe. According to Knippertz, the Iberian Peninsula was experiencing a heat wave at the time, with widespread temperatures above 40 degrees Celsius (100° Fahrenheit).

Precisely what caused this mid-latitude rotation remains somewhat of a mystery. “I would call it a low-level mesoscale eddy,” said Stephen Munchak, a research meteorologist at NASA’s Goddard Space Flight Center. He noted that the spin was possibly driven by torque from the frictional differences between ocean and land; additional data and imagery would likely provide more clues.

Cyclonic rotations like this one usually occur during the summer months over Iberia, as well as Morocco. See the circulation off Morocco in July 2016 and more recently in June 2017.

In summer, the slow-moving systems often form clouds without any precipitation.