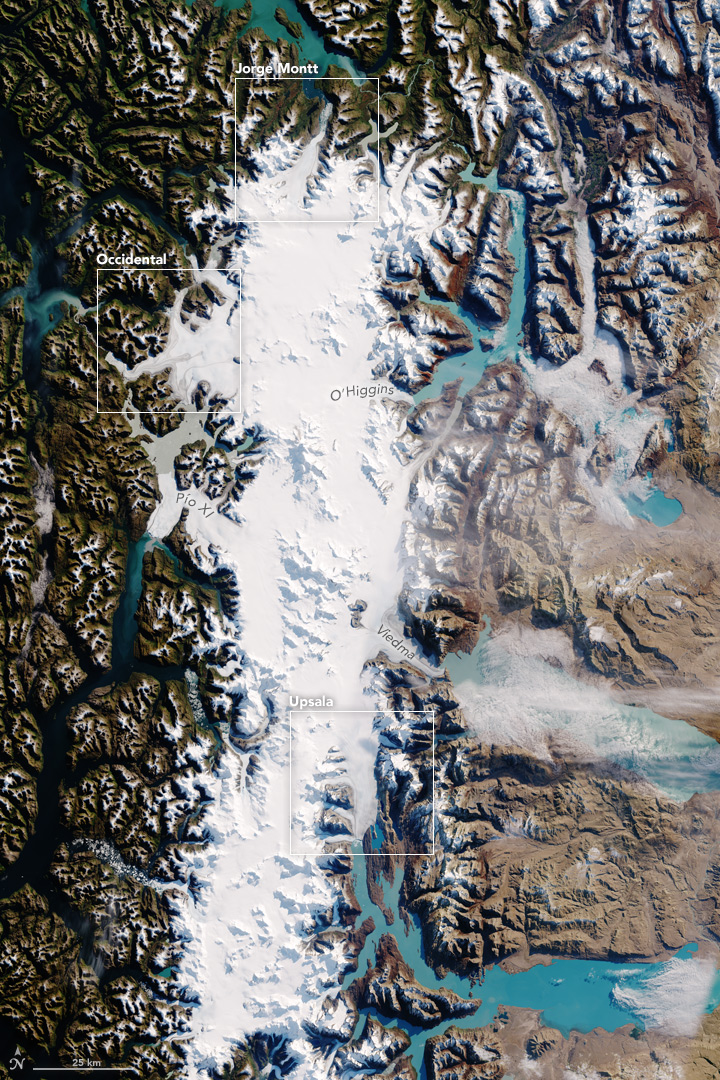 Patagonia is one of the windiest and wettest regions on Earth. Westerlies gain moisture and momentum as they cross the Pacific Ocean. When they reach South America, they ride up and over the Andes, through fjords, and across two icefields.

Having spent several field seasons on and around the South Patagonian Icefield, glaciologist Michele Koppes of the University of British Columbia knows first-hand the challenges posed by the elements. “The katabatic winds that drain down the eastern slopes can pick you and your heavy backpack right off your feet and turn you over like a turtle,” Koppes said, a phenomenon she experienced a few times while trying to reach glaciers in Torres del Paine and Los Glaciares National Park. “The winds can blow tents right off their stakes and send them tumbling across lakes.”

And then there is the moisture to contend with. Precipitation can be intense on the west side of the icefields, which receive up to 4 meters (160 inches) of rain and snow per year; it is more moderate in the east, which receives less than 1 meter (40 inches) per year. Koppes has spent weeks at a time waiting for weather clear enough for an airplane to fly her to the glaciers to collect data. She has met climbers huddled in tents for more than a month, waiting for a window of weather favorable enough for ascending the pinnacles on the icefield’s east side.

Scientists endure these conditions in order to better understand how and why the Patagonian icefields are shrinking. “The glaciers in this region are changing rapidly,” said Eric Rignot, a glaciologist at NASA’s Jet Propulsion Laboratory and the University of California-Irvine. “They are, in fact, melting away at some of the highest rates on the planet. The reason is that they are not only melting from the top because of warm air, but also from below, where they come in contact with ocean and lake waters.”

Often shrouded in clouds and mist, the entirety of the South Patagonian Icefield is rarely visible from space. This mosaic combines cloud-free images acquired by the Operational Land Imager (OLI) on Landsat 8 on April 29, May 1, and May 24, 2016.

The North and South Patagonian icefields are what’s left of a much more expansive ice sheet that reached its maximum size about 18,000 years ago. The modern icefields are just a fraction of their previous size, though they remain the southern hemisphere’s largest expanses of ice outside of Antarctica. Today, the South Patagonian Icefield spans about 13,000 square kilometers, more than three times larger than the north icefield. Its ice spreads across the border between Chile and Argentina. (The north icefield, in contrast, is entirely in Chile.)

In the broad mosaic view above, the differences between the western and eastern sides are clear. The landscape west of the icefield is much greener, driven by the intense precipitation that drops out of warm, wet Pacific air masses as they ascend the mountains. Land around the fjords support large trees and lush forest cover. “The vegetation is so dense that it is sometimes impossible to penetrate without a machete and a lot of patience,” Koppes said.

Many of the fjords are choked with icebergs, especially in front of Jorge Montt. The presence of icebergs indicates the rapid disintegration and retreat of these glacier systems. Ice gets concentrated within 10 kilometers of the glacier fronts due to shallow sills at the mouths of these fjords, which ground and trap the larger bergs. Thick plumes in the fjords highlight the huge amount of sediment that the glaciers erode as they slide down toward the ocean. 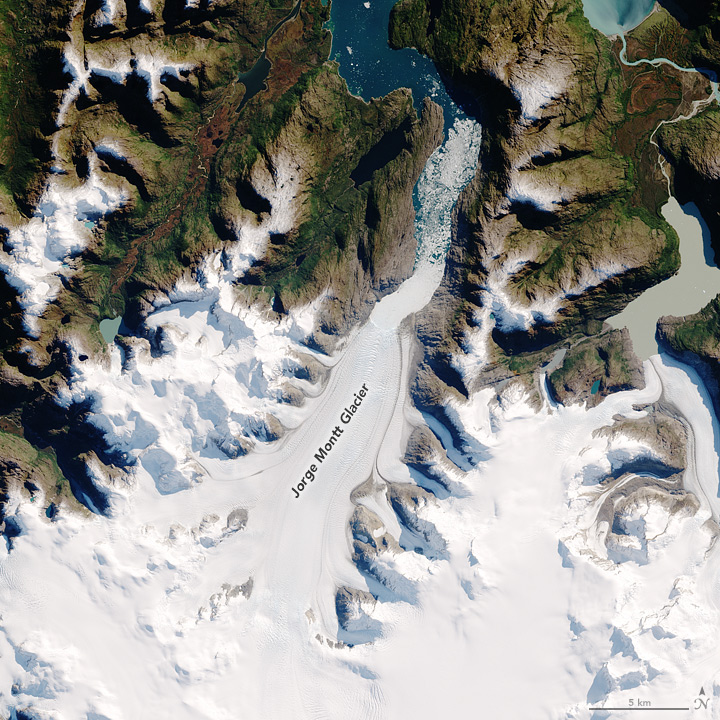 In contrast, glaciers on the eastern side of the icefield end in some of the largest proglacial lakes in the world. The lakes are filled with so much fine sediment from the glaciers—also known as glacial flour—that their turquoise color can be seen from space.

Detailed images provide a closer look at some of the icefield’s largest, most notable glaciers. Jorge Montt, located on the north end of the South Patagonian Icefield, flows south to north and empties into a fjord that ultimately angles west toward the Pacific Ocean. Since the mid 1980s, the speed of ice flow has fluctuated, with particularly spectacular retreat events documented in the 1990s. In all, the glacier retreated 13 kilometers between 1984 and 2014.

In this image above, you can clearly see the glacier’s former extent in the 1980s, visible as the tan-gray area devoid of vegetation around the ice. This glacier has thinned and retreated so fast that vegetation has not yet had a chance to fill in. During peak retreat, the glacier was thinning vertically at a rate of 31 meters (100 feet) per year.

“When we flew over this glacier in 2014 to survey its thickness,” Rignot recalled, “the airplane was at an altitude that would have put us inside the glacier in the 1980s.” 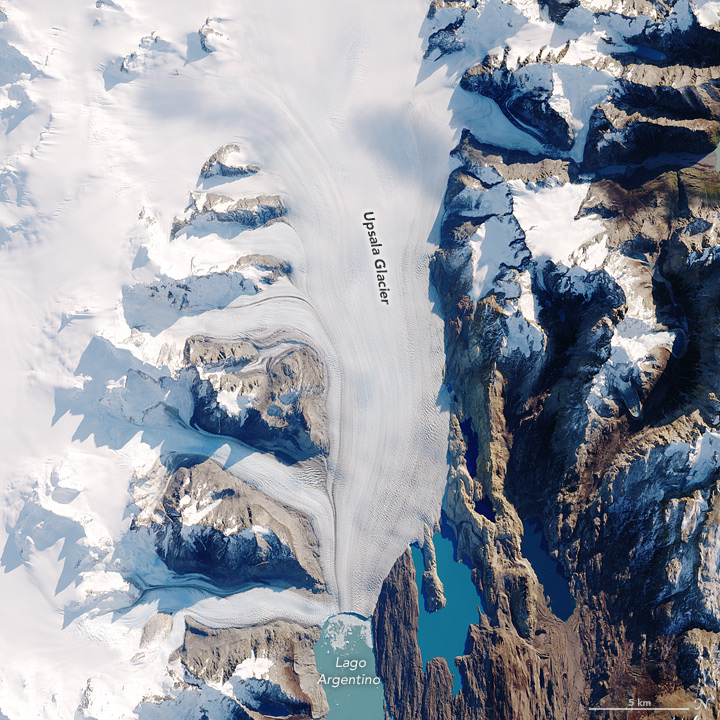 Upsala Glacier, on the eastern edge and flowing into Lago Argentino, is also among the icefield’s largest and longest glaciers. Its retreat has been ongoing since the place was first documented in 1810. The light brown rock along the glacier’s edge would have been covered with ice in the 1980s. From 1985 to 2001, the glacier doubled its speed, then slowed down, and has since sped up again. 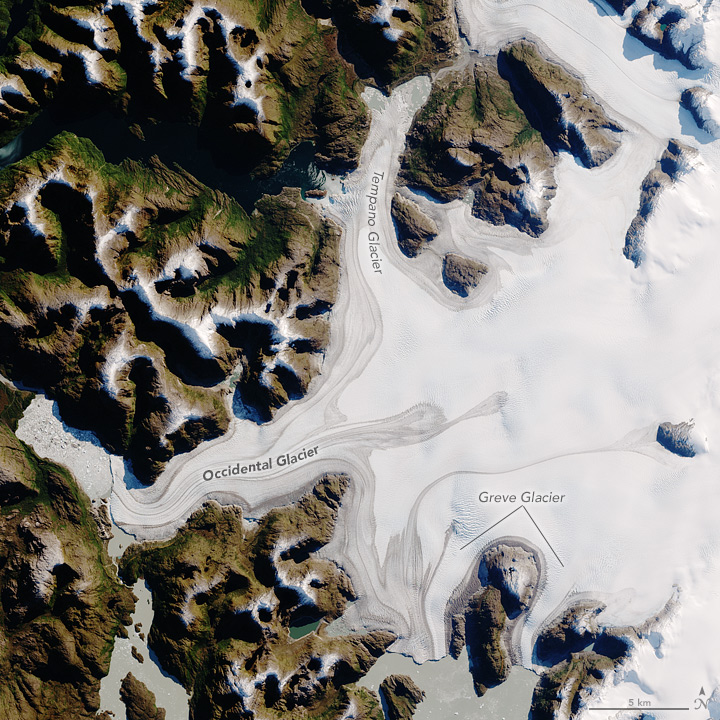 Occidental, another of the larger glaciers, has retreated less than its neighbors—only about 1 kilometer since the 1980s. It drains ice from a basin that nearly spans the entire icefield; the ice flows via a deep trough that extends below sea level. Both Occidental, and Greve Glacier to the southeast, flow along the flank of the active Lautaro volcano. Bands of volcanic ash are visible atop these glaciers at low elevation.

Occidental sheds its icebergs into a small, shallow proglacial lake, where they are trapped and then slowly melt away. Greve also calves icebergs into a shallow lake, which is dammed to the south by Pío XI Glacier. According to Rignot, there used to be a farm in the valley in front of Greve. The farmer had to move when the valley was blocked by the advance of Pío XI, which resulted in the formation of the lake.

“What is worrying is that continuing addition of water to this ice-dammed lake will slowly cause the terminus of Pío XI to float, which may cause a catastrophic outflow of water that could flood the neighboring regions,” Koppes said.

Meltwater from the Patagonian icefield as a whole contributes to sea level rise. The contribution is less than what will come from Greenland and Antarctica, but scientists plan to keep studying the region from space, from the air, and on ground. According to Rignot: “Understanding the evolution of these glaciers helps us understand what glaciers in Greenland and Antarctica may look like in the future in a much warmer climate.” 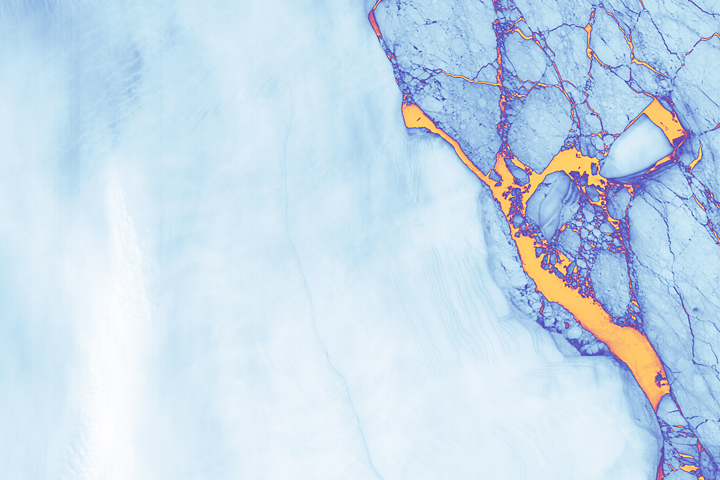 Brüggen Glacier in southern Chile is the largest western outflow from the Southern Patagonian Ice Field and, unlike most glaciers worldwide, advanced significantly since 1945. From 1945 to 1976, Brüggen surged 5 km across the Eyre Fjord, reaching the western shore by 1962 and cutting off Lake Greve from the sea.