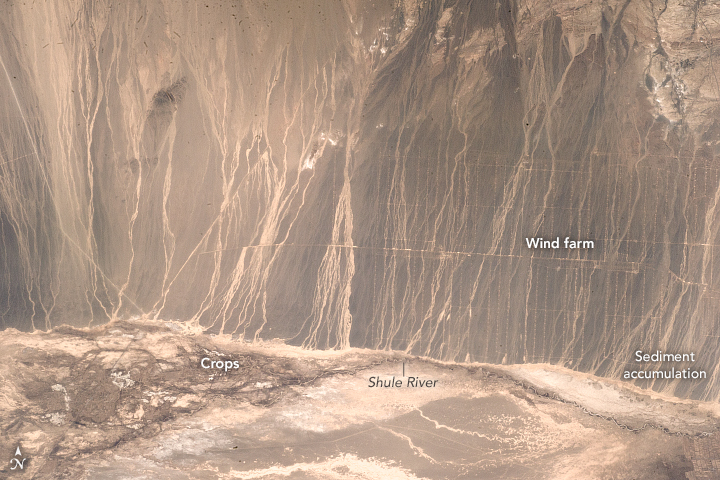 An astronaut aboard the International Space Station captured this photograph of drainage patterns on the southwestern end of the Gobi Desert in China’s Gansu Province. The desert landscape—part of the Hexi (or Gansu) Corridor route along the historical Silk Road—is low in elevation, generally flat, and surrounded by mountains and rolling hills.

The foothills of the Tien Shan mountains lie to the north of this scene. As temperatures warm in the springtime, snow melt from the higher elevations flows down into streams, forming narrow alluvial fans. The water carries sand, silt, and clay that accumulate at the mouths of the streams. These sediments are then available for further transport by larger valley rivers such as the Shule.

The grid pattern superimposed on the basin is part of the Gansu Wind Farm Project. Narrow roads mark the paths between dozens of wind turbines. Currently China is the largest emitter of greenhouse gases, and the wind farms are part of an effort to reduce carbon emissions and to harness cleaner energy.

Most of the agriculture in this region follows along the Hexi Corridor. Several small towns skirt the Shule River, diverting water for cultivation of wool, tobacco, and a variety of grain and fruit crops.

Astronaut photograph ISS050-E-29783 was acquired on December 29, 2016, with a Nikon D4 digital camera using a 240 millimeter lens, and is provided by the ISS Crew Earth Observations Facility and the Earth Science and Remote Sensing Unit, Johnson Space Center. The image was taken by a member of the Expedition 50 crew. The image has been cropped and enhanced to improve contrast, and lens artifacts have been removed. The International Space Station Program supports the laboratory as part of the ISS National Lab to help astronauts take pictures of Earth that will be of the greatest value to scientists and the public, and to make those images freely available on the Internet. Additional images taken by astronauts and cosmonauts can be viewed at the NASA/JSC Gateway to Astronaut Photography of Earth. Caption by Andi Hollier, Hx5, JETS Contract at NASA-JSC.

Turbines and alluvial fans scratch out shapes across the flat landscape. 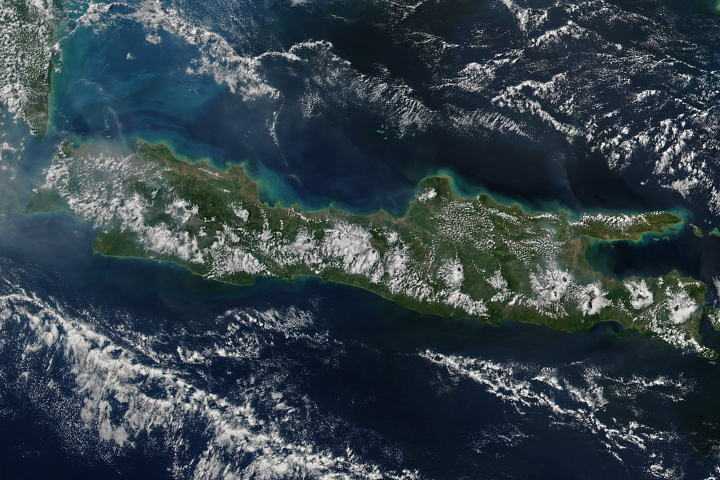 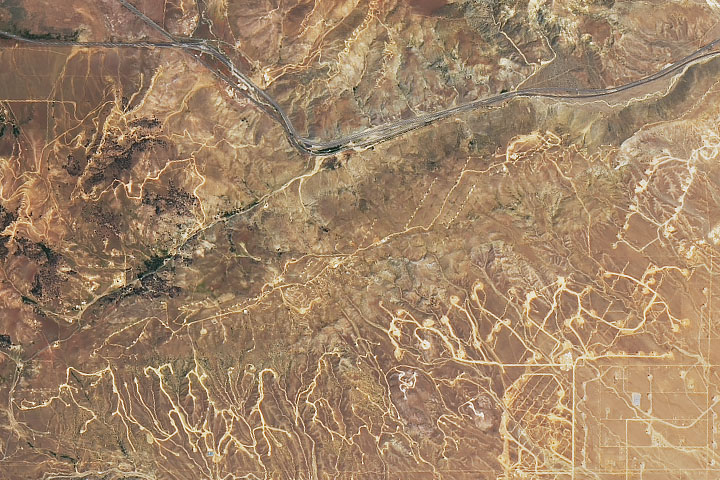 Get a close-up look at enormous wind turbines along this short segment of the Pacific Crest Trail.