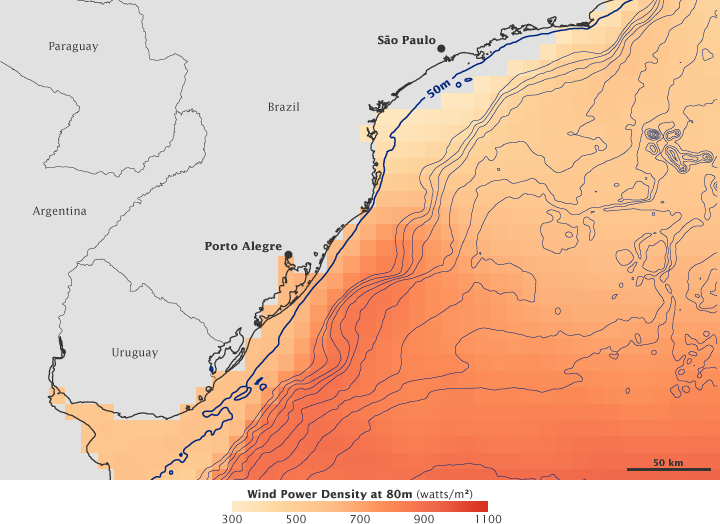 Home to the world’s largest river by volume, the Amazon, Brazil has long relied on hydropower. In 2001, however, drought dropped river volumes around the country enough to threaten blackouts. The experience lingered in the memory of a Brazilian doctoral student named Felipe Pimenta when he enrolled in a wind energy course at the University of Delaware in 2005. As his final project for the class, Pimenta decided to evaluate the offshore wind energy potential near his homeland in southern Brazil, a place known for its strong winds. To figure out whether offshore wind farms were viable, Pimenta had to combine satellite and buoy observations of wind speed with the specifications of currently available technology as well as with data on water depth, which restricts where offshore farms can be located.

This image shows the results of Pimenta’s analysis of wind energy potential for southern Brazil. Land appears in pale gray, with a black line delineating the coastline, and deep gray lines marking the borders between neighboring countries. In the ocean, a series of blue lines marks ocean depths, or bathymetry. The varying shades of orange signify wind power density, with near-red showing the greatest energy potential and near-yellow showing the smallest.

Today’s offshore wind turbines must be placed in water no more than 50 meters (165 feet) deep (though floating turbines aren’t far off), and the turbine hubs typically operate at 80 to 100 meters (260 to 330 feet) above the surface of the land or water. Consequently, the thickest blue line marks the area where wind turbines could be placed, and the wind measurements indicate wind speeds 80 meters above the surface. Although wind speeds are much greater farther from shore, an area of high wind-energy potential appears near the city of Porto Alegre, where wind speeds appear great enough to meet the region’s energy needs—102 gigawatts per year on average, compared to the need for an estimated 100 gigawatts in 2008.

To calculate the region’s wind speeds, Pimenta could look to two data sources, but both had disadvantages. Ocean buoys directly measure wind speed at 5-minute or even 1-minute intervals, but the region had only two buoys to cover an area of some 80,000 square kilometers. NASA’s QuikSCAT satellite measures wind speeds across the globe, but the sensor observes a particular location just once each day. In addition, its wind speed estimates are inferred from observations of ocean waves. To rely on QuikSCAT data, Pimenta had to ensure the data were reliable, so he compared wind speeds measured by QuikSCAT to those measured by one of the region’s buoys. Although not an exact match, the wind speed measurements were close enough to estimate power potential.

NASA image by Robert Simmon, based on data provided by Felipe Pimenta. Caption by Michon Scott.