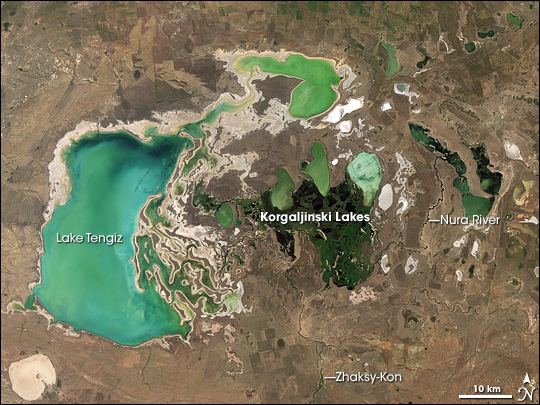 In north-central Kazakhstan lie a series of ponds and lakes connected by the Nura River. In the west is Lake Tengiz, a salt lake with no outlet and fluctuating depth. In the east are the Korgaljinski (or Kourgaldzhin) Lakes, a network of freshwater lakes mixed with marshland. Home to hundreds of plant and bird species, and dozens of mammal species, the area has been designated a Ramsar wetland site.

On July 29, 2001, NASA’s Landsat 7 satellite took this picture of Tengiz and Korgaljinski Lakes. Lake Tengiz dominates this image—a nearly uniform patch of blue-green outlined by off-white. The lake’s pale lining indicates that its water level has dropped, exposing now-dry shoreline. East of Lake Tengiz, but connected to it via meandering waterways, are the Korgaljinski Lakes. Three large patches of pale blue-green, resembling the hue of Lake Tengiz, lie at the northern end of this marshy area. To the south, smaller water bodies mix with deep green vegetation. Looking like a delicate thread of deep blue, the Nura River appears to the east of these lakes. From the south, the Zhaksy-Kon also feeds this wetland network. Lush green vegetation in this area contrasts sharply with the otherwise arid landscape.

The Ramsar designation for these water bodies reflect their importance to wildlife. Tengiz and Korgaljinski Lakes may be the world’s most northerly site for nesting flamingoes. It is also a nesting site for more than 100 other bird species, and more than 300 bird species live on or around the lakes at various times of year. Uninsulated power lines electrocuted many birds in this area until the lines were taken down and replaced with a solar power station. The World Bank also initiated a project to clean up mercury pollution and provide a safe alternative water supply for local residents.