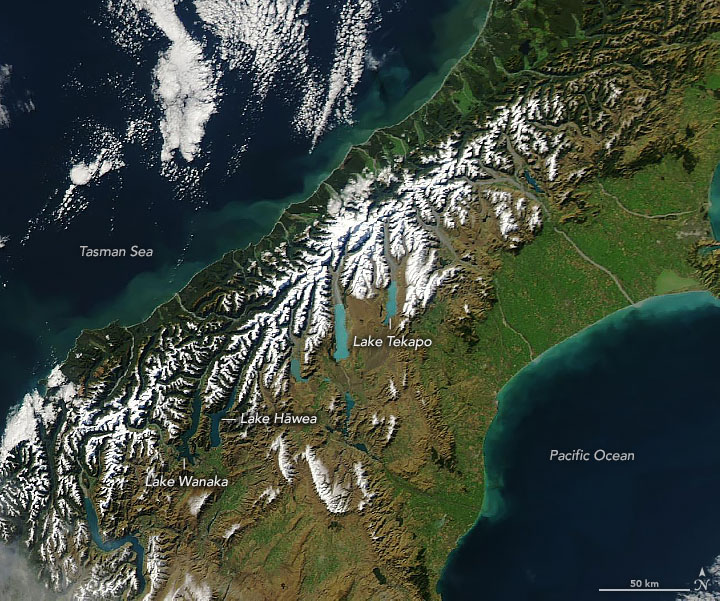 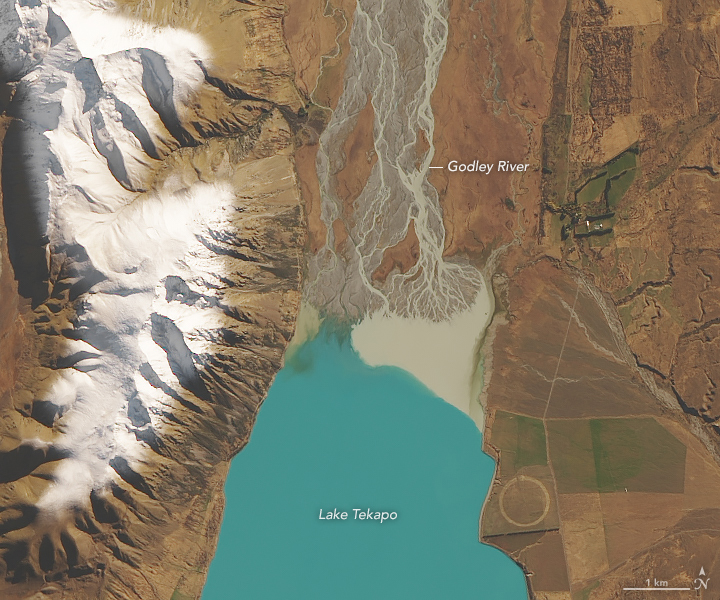 Four large lakes on New Zealand’s South Island stand out for their distinctive turquoise color. As seen in this natural-color satellite image, Lake Pukaki, Lake Tekapo, Lake Ohau, and Lake Benmore all have remarkably light tones in comparison to the dark blue waters of Lake Wanaka and Lake Hāwea to the southwest.

The reason for the difference? The turquoise lakes are fed by rivers where large, active glaciers are pushing through rocky valleys upstream. The glaciers function like bulldozers, grinding away and pulverizing rocks along valley floors and walls. The process produces a fine-grained powder of silt and clay—glacial flour—that is picked up by meltwater streams. Since the particles are so fine, they are slow to sink to the bottom, remaining suspended in the water column instead.

When sunlight hits the water, these particles absorb the shortest wavelengths: the purples and indigos. Meanwhile, the water absorbs the longer wavelength reds, oranges, and yellows. That leaves mainly blues and greens to get scattered back to our eyes.

Notice how little vegetation lines the valleys around the Tasman and Godley rivers compared to the valleys north of Lake Wanaka and Lake Hāwea. Vegetation produces organic matter and other substances—scientists call it colored dissolved organic matter (CDOM)—that darken water.

Satellites are quite useful for comparing lake color across broad areas. Researchers from the University of Waikato recently reported using Landsat 8 to catalogue the color of 1,486 lakes in New Zealand. They found broad patterns related to the type of environment where a lake was located and the way nearby land was used.

For instance, blue lakes mostly occurred in sparsely populated, mountainous areas. What the researchers described as yellow lakes mostly appeared in forested areas, where water had high CDOM values. Lakes that were classified as green or green-yellow were more likely in areas with farms nearby. That is because farms often produce high levels of nitrogen and phosphorous runoff that fuel algae growth, which can turn water green.