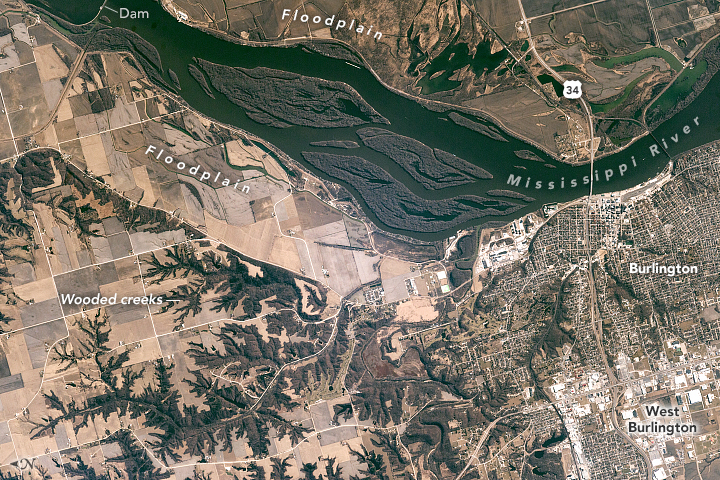 The city of Burlington, Iowa, is situated on high bluffs next to the Mississippi River. The city thus has a commanding view of the wooded, finger-like creeks that lead down to the river; of the low floodplain and its farm fields; and the forested islands in the middle of the river. The Mississippi narrows significantly at Burlington, making a convenient location for two bridges. (For scale, the Interstate 34 bridge is 660 meters (720 yards) long.) A dam slows flow of the Mississippi River, but includes a lock to allow barge traffic to pass.

Major floods along the Mississippi tend to spill water onto the low floodplain, such that the view from Burlington—which stands about 40 meters (130 feet) above the river—would show the islands and floodplain entirely under water. The largest flood recorded at Burlington occurred in June 2008, when the river rose to 25.73 feet, more than 3 meters (10 feet) above flood stage.

This photo is one in a series taken by an astronaut aboard the International Space Station (ISS) on a cold day in February 2017. Other images follow the Mississippi River and show towns such as Davenport, the twin towns of Clinton and Fulton, and also Hannibal and East Hannibal.

Astronaut photograph ISS050-E-51403 was acquired on February 19, 2017, with a Nikon D4 digital camera using an 1150 millimeter lens, and is provided by the ISS Crew Earth Observations Facility and the Earth Science and Remote Sensing Unit, Johnson Space Center. The image was taken by a member of the Expedition 50 crew. The image has been cropped and enhanced to improve contrast, and lens artifacts have been removed. The International Space Station Program supports the laboratory as part of the ISS National Lab to help astronauts take pictures of Earth that will be of the greatest value to scientists and the public, and to make those images freely available on the Internet. Additional images taken by astronauts and cosmonauts can be viewed at the NASA/JSC Gateway to Astronaut Photography of Earth. Caption by Andi Hollier, Hx5, JETS Contract at NASA-JSC.