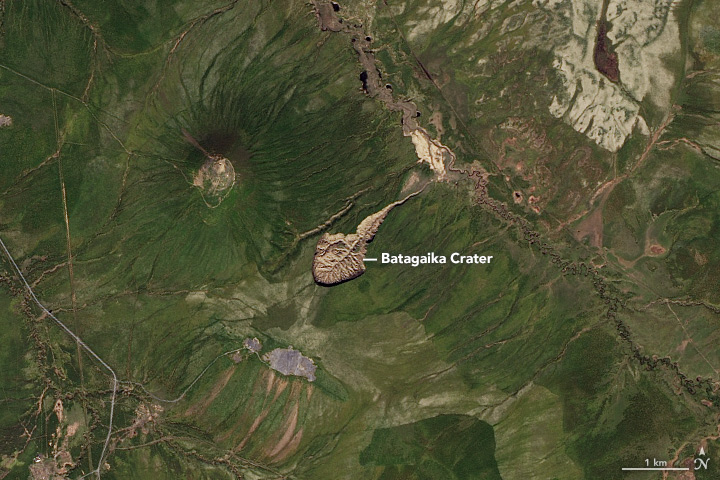 The walls of this immense crater look as though they could have been scooped out of ice cream, but for the protruding ends of plant roots. And at more than 85 meters (275 feet) tall in places, Batagaika’s cliff-faces keep growing while the crater below becomes deeper and wider.

Batagaika Crater has formed as rising temperatures have thawed the permafrost in Siberia. Warmer summers and shorter winters are causing the frozen layer cake of ice and soil to collapse (or “slump”) and erode away in much of the Arctic. Dozens of permafrost craters pock Russia’s northern landscape, but none rival the size of Batagaika, a so-called “megaslump” that has been devouring the slope above it and moving backwards into the hillside.

“There have been reports that these backwards-thawing features are appearing around the Arctic, but this one is in a league of its own,” said Mary Edwards, a professor at the University of Southampton who co-authored a 2017 study of the crater with Julian Murton of the University of Sussex. “Scientifically, it’s very interesting because we can see what’s underground.”

The site—the biggest permafrost crater in the world—holds clues to prehistoric life on Earth. Researchers believe the exposed ice and soil along the crater’s edges could hold up to 200,000 years of geological and biological history.

Batagaika has disgorged a handful of animals since it began growing, likely in the early 1980s. Equus lenensis (a Pleistocene horse) and Bison priscus (prehistoric steppe bison) have emerged from the thawing soil, as have assorted remains of cave lions and wolves. Researchers have found evidence that the region had a warmer climate and relatively dry, windy conditions during the Pleistocene Epoch. Spruce and pine forests once grew here, according to bits of wood found in the thawing soil.

Today, low shrubs and larch trees grow across this tundra landscape. From space, the gash of exposed soil appears rough-cut, brown against the green terrain. The steep hills inside the crater contain few plants, a sign of their recent formation. The natural-color image above was captured on June 7, 2016 by the Operational Land Imager (OLI) on the Landsat 8 satellite. The images below, taken by OLI (right) and the Enhanced Thematic Mapper Plus (ETM+) on Landsat 7 shows Batagaika’s rapid advance since 1999.

Below the cliff face, steep hills and gullies drop to Batagaika’s floor. As more of the material at the bottom of the slope melts and comes loose, a larger face is exposed to the air, which in turn increases the speed of permafrost thawing. The crater will likely eat through the entire hillslope before it slows down, said Edwards.

“Every year as soon as temperatures go above freezing, it’s going to start happening again,” she said. “Once you’ve exposed something like this, it’s very hard to stop it.”

A gaping hole in the Siberian landscape has grown significantly over the past three decades.