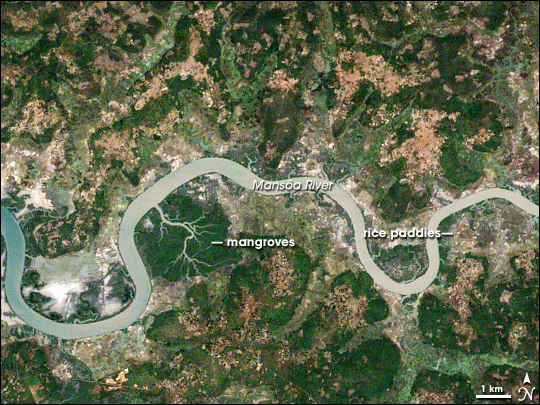 The small country of Guinea-Bissau along the African west coast is home to a population of roughly 1.6 million people, most of whom are employed in agriculture. The country’s small population limits environmental impacts, but farming has nevertheless reduced the extent of Guinea-Bissau’s mangrove forests, according to a report issued by the United Nations Environment Programme.

Much of Guinea-Bissau’s agriculture involves rice farming. The country’s largest ethnic group, the Balanta, began rice paddy cultivation in the late seventeenth century. North of the capital city of Bissau, rice cultivation has transformed the landscape along two coastal rivers, the Mansôa River (pictured) and the Gêba River (visible in the large image). The Enhanced Thematic Mapper Plus (ETM+) on NASA’s Landsat 7 satellite acquired this image of the area on December 2, 2006.

To develop rice paddies, farmers must cut through the mangrove forest and fashion mud dikes that restrain ocean tides. Mangroves need contact with the ocean, however, so they rapidly die in the wake of these changes to the landscape. Farmers clear the undergrowth through agricultural fires. In the image, the remaining mangroves appear as bands of dark green in patches along the banks of the Mansôa Rivers. Areas of intensive rice cultivation border the mangrove belts, appearing as areas of pale gray.

Despite agriculture’s negative impact on mangroves, Guinea-Bissau made progress toward sustainability in other ways. The country’s percentage of protected surface area rose from 3.2 percent in 1990 to 7.3 percent in 2000, and remained at the higher level five years later. Over the same period, per capital carbon dioxide emissions fell from 0.2056 to 0.1752 metric tons.

The Bafing River travels through Guinea and Mali, and eventually joins with the Senegal River in western Africa. In the 1970s, drought struck the region, prompting a multinational effort to develop irrigation and power generation.