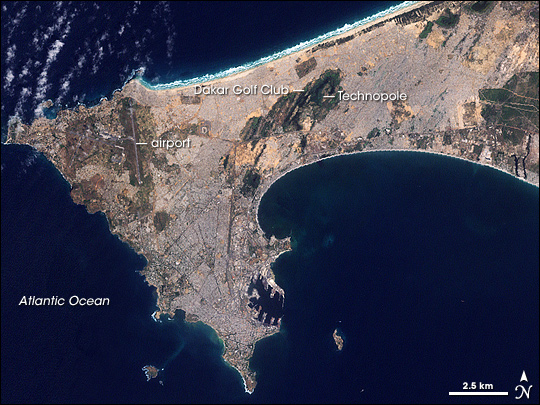 In 2008, one out of every four people living in Senegal lived in the coastal capital of Dakar. Over previous decades, the city spread over the Cap Vert Peninsula as a result of both migration and growing families. In the 1940s, the city occupied just the southern tip of the peninsula. By the beginning of the twenty-first century, cityscape had sprawled both northward and eastward.

This natural-color image of Dakar is made from observations taken by the Enhanced Thematic Mapper Plus (ETM+) on NASA’s Landsat 7 satellite. This picture actually merges two scenes, acquired on November 4 and 11, 1999.

Urbanization leaves numerous marks on the landscape in this scene. In the southern part of the peninsula, piers protrude into the ocean, looking like rows of jagged teeth. Throughout the southern portion of the peninsula, gray hues, straight lines, and sharp angles reveal paved roads and buildings spreading toward the north. In the northwest, a long, straight line outlined by green indicates the runway of Dakar’s airport. East of the airport, a large area of green reveals Technopole, a protected area and popular bird-watching destination.

A 2008 report issued by the United Nations Environment Programme (UNEP) stated that Dakar’s population and urbanized area continued growing into the early 2000s. Urbanized areas gradually encroached upon the farmland that had historically fed the city’s population. The heavily settled area southeast of Technopole had started as a resettlement of slum dwellers but its population had grown to more than a million people by 2008. The city suffered from problems typical to fast-growing cities, including improper sanitation and air pollution.

Besides reporting growing urbanization, however, UNEP also reported Senegal’s progress in environmental sustainability. Between 1990 and 2005, access to improved sources of drinking water and sanitation increased, while the proportion of urban populations living in slums throughout the country decreased.