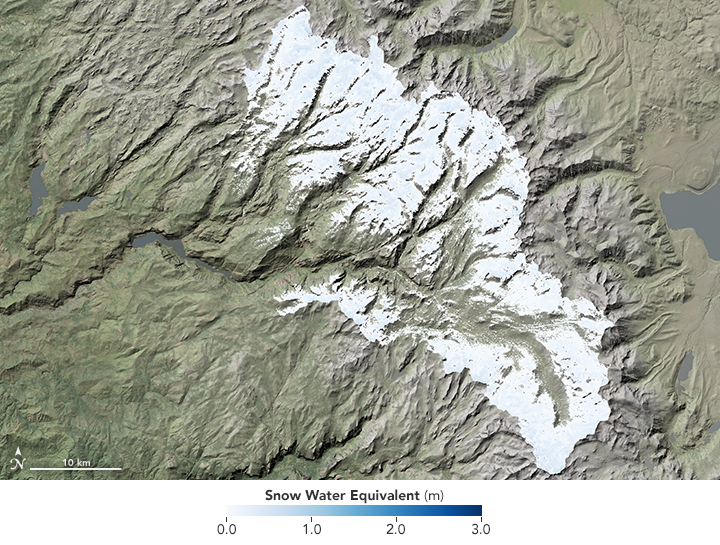 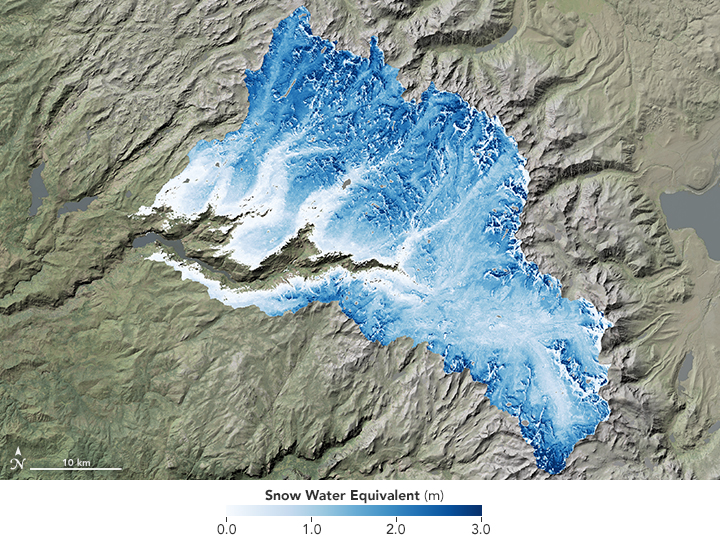 The maps above show snow-water equivalents (in meters of liquid water) across the Tuolumne River Basin as measured by the ASO team in 2015 and 2017. Snow-water equivalent (SWE) is an estimate of how much water you would get if all of the snow melted at once. Dark blue areas indicate the deepest snow and most water, while light blue to white areas have much less snow. Turn on the image comparison tool to see the changes, or click here to download an animation of SWE from 2014 to 2017.

“In such a huge snow season, the data available from ASO will provide critical guidance for water managers as we enter into the peak melt season later this spring,” said Frank Gehrke, chief of the California Cooperative Snow Surveys at the California Department of Water Resources.

Snowpack across California in 2017 is close to the largest total on record. ASO data from Tuolumne measured the snowpack there to be twice the volume present in April 2016, and 21 times larger than in 2015, the lowest on record. The combined April 1 snow water equivalent of 2013 through 2016—when California was in an intense drought—add up to just 92 percent of the 2017 total.

According to reports from the California Department of Water Resources, the state as a whole received 175 percent of the average rain and snowfall for fall and winter; it saw 160 percent of the average snowfall. In much of the Central Sierra, snow lies 8 meters (25 feet) deep, and in some high mountain basins, it is deeper than 24 meters (80 feet). Water managers estimate that as much as 36 cubic kilometers (29 million acre-feet) of water is now stored in the mountains across the state.

Most snow-monitoring programs sample a few locations on the ground or give an average across a broad area. The Airborne Snow Observatory is the only program that measures snow depth, snow water equivalent, and how much sunlight snow reflects over an entire basin. The research team accomplishes this with a scanning lidar and an imaging spectrometer mounted on a King Air plane.

“Before ASO, water managers had intense stress worrying about how much potential runoff was stored in the mountain snowpack, with little historical information about snowpack years as large as this to guide reservoir management and allocation decisions,” said principal investigator Tom Painter of NASA’s Jet Propulsion Laboratory. “With ASO, we will be precisely quantifying this volume and how it changes through the spring."

This year, the ASO program also began mapping the San Joaquin River Basin in California’s Central Valley. All told, the team now maps the snowpack of the entire Central Sierra Nevada range from Kings River to the Tuolumne River. The ASO flies in California, Colorado, Oregon, Nevada and Idaho, and is now flying research flights in the Swiss Alps.