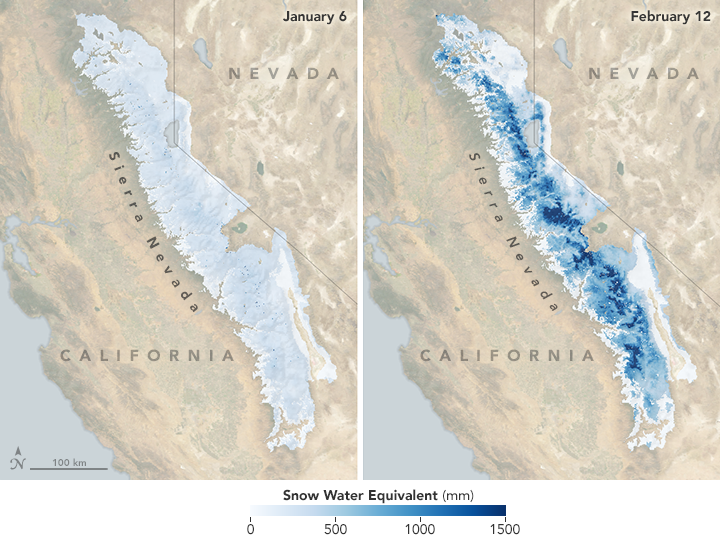 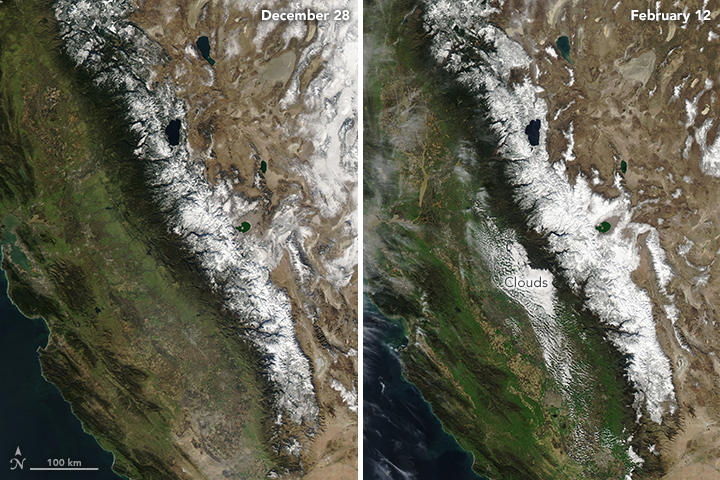 Snowpack on the Sierra Nevada provides one-third of the water consumed by California citizens, farmers, and businesses each year. For the first time in at least five years, there should be more than enough of it.

According to the California Department of Water Resources (DWR), the water stored as snow in the Sierra Nevada range was 185 percent of the long-term average for the beginning of March. One year ago, it was 83 percent of the norm. According to the latest measurements from 98 ground-based stations, the average snow-water equivalent in the mountains was 45.5 inches as of March 1, 2017. Snow-water equivalent is an estimate of how much water you would get if all of the snow melted at once.

The abundance of snow is spread out across the mountain range. California DWR reported snowpack at 159 percent of normal in the Northern Sierra/Trinity region, 191 percent in the Central Sierra, and 201 percent in the Southern Sierra. State water scientists noted that the snowpack is the highest it has been since 1983 (the end of a major El Niño event).

At Phillips Station near Lake Tahoe—one of the oldest reporting stations in the region and a site of frequent media interest—the snow depth is 43.4 inches this week. One year ago, it was 24.3 inches, and two years ago it was 6.5 inches.

The maps above show satellite-based estimates of snow-water equivalents across California’s Sierra Nevada as measured by the University of Colorado Center for Water, Earth Science and Technology and NASA’s Jet Propulsion Laboratory. Dark blue areas indicate the deepest snow and most water. Survey results were released on January 6 and February 12, 2017. Note how much the snowpack grew in just six weeks due to a series of intense winter storms fueled by atmospheric rivers.

To derive the snow-water estimate, the researchers combined data from the Moderate Resolution Imaging Spectroradiometer (MODIS) instruments on NASA’s Aqua and Terra satellites; from ground-based snow sensors from California DWR; and from a computer model. The imagery and data were calibrated against past measurements made in the region by NASA’s Airborne Snow Observatory, which uses lidar to measure the snowpack in yearly spring flights.

The natural-color images were acquired by Aqua MODIS on December 28, 2016, and February 6, 2017, the most cloud-free days around the time of the snow surveys.

According to California DWR, the current water year (which began on October 1, 2016) is on pace to be the wettest on record. In a March 2 report from the U.S. Drought Monitor, just 25.5 percent of California has any measurable level of dryness or drought, and just 4 percent of the state remains in severe drought. At the beginning of January 2017, about 83 percent of California qualified as dry or in a drought; that number was 100 percent at the start of the water year, with 43 percent in extreme or exceptional drought.

News outlets reported that 43 feet of snow have fallen on the Mammoth Mountain ski resort in Southern California this winter. The venue hopes to stay open for skiing until July.