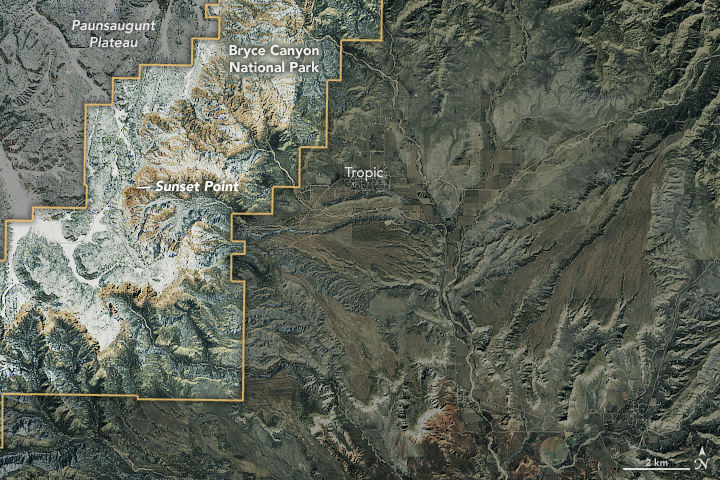 Utah’s Bryce Canyon is not the deepest in the United States; its largest “amphitheater” of naturally eroded rock drops 240 meters. Arizona’s Grand Canyon, for comparison, measures more than 1,800 meters deep in places. But photographers who visit Bryce Canyon National Park are not typically looking for dizzying heights and depth. They are there to capture images of the delicate spires called “hoodoos” that rise from the canyon.

On March 9, 2017, the Operational Land Imager (OLI) on Landsat 8 captured this natural-color image of Bryce Canyon National Park. It shows the north-central part of the park in the vicinity of the main amphitheater. Unlike canyons sculpted primarily by a river, Bryce Canyon is the result of weather-induced erosion. Over time, weathering has shaped the series of hoodoo-filled amphitheaters that descend from the east side of the Paunsaugunt Plateau.

Compared to Zion Canyon just 80 kilometers (50 miles) away, Bryce Canyon is about 300 meters (1,000 feet) higher in elevation, and the climate is cooler and moister. When this satellite image was acquired, snow covered the plateau. On February 9, 2017, photographer and writer Ray Boren captured a ground-based photo showing snow extending into Bryce Canyon. 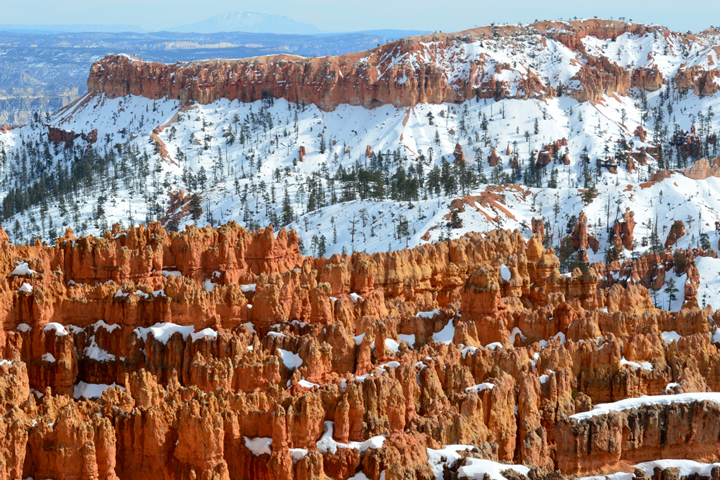 Boren shot his photo while looking toward the southeast from Sunset Point, one of the park’s many overlooks accessible from a network of trails. As the name implies, the view from Sunset Point is most spectacular near sunset, when the colorful rock formations are illuminated by low-angle light. Most of the rock pictured here is 50-million-year-old limestone from the Claron Formation. Iron oxide minerals have tinged the rock red, orange, and yellow.

Winter weather makes for more than a pretty picture. It is one of the reasons for Bryce’s amphitheaters and the high concentration of hoodoos—so many, in fact, that the area has been called the “silent city.” When temperatures rise, meltwater from the snow and ice works its way into cracks in the rock. When the water re-freezes, it expands and makes the rocks vulnerable to erosion. The hoodoos are further sculpted by the region’s small amount of slightly acidic rainfall, which dissolves the limestone. The limestone weathers faster than layers of other rock types also present, giving the hoodoos their lumpy shape.