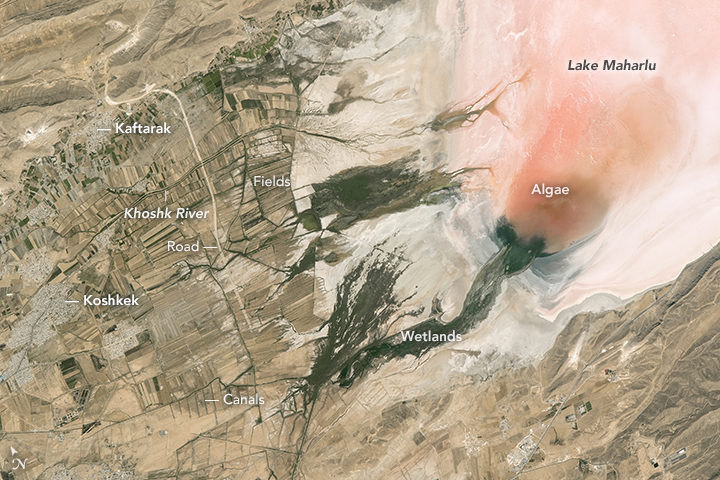 An astronaut aboard the international Space Station took this photograph of the shores of Lake Maharlu in the mountains of southwest Iran. Yearly evaporation in this desert region is much greater than yearly rainfall so that, even with runoff from local rivers, the lake is often dry. And as with many desert lakes, salt has washed down from the surrounding mountains and accumulated slowly over tens of thousands of years. This makes a white crust of salt on the lake floor.

When water does reach the lake floor, new colors can emerge. Water allows salt-loving algae to thrive, and different organisms display colors ranging from green to orange to red. In this photo, water rich with red algae spreads out into Lake Maharlu. In the middle of the image, fingers of green wetland vegetation along the shore contrast with the light tones of the lake floor.

In 2015, an astronaut using a short focal length lens captured a wide view of this area, which you can see here. By contrast, this 2016 photograph was taken with a very long focal length lens and captures fine details of the lake and surrounding land surface.

Three rivers enter the lake, bringing fresh water from the mountains. The rivers have been engineered into straight canals that bring water to the intensively irrigated fields. Narrow fields (only 55 meters or 180 feet wide) allow a greater number of farmers to access the water-supply canals. A road crosses the rivers as it cuts through the fields.

On the far left, individual buildings can be detected in two towns. These towns are outliers of the ancient city of Shiraz, which lies 25 kilometers upstream from the lake, just outside the left margin of the image. As with other closed lake basins in deserts, Lake Maharlu accumulates not only salt but also the chemical pollution washed downstream from Shiraz.

Astronaut photograph ISS047-E-152029 was acquired on June 13, 2016, with a Nikon D4 digital camera using an 1150 millimeter lens, and is provided by the ISS Crew Earth Observations Facility and the Earth Science and Remote Sensing Unit, Johnson Space Center. The image was taken by a member of the Expedition 47 crew. The image has been cropped and enhanced to improve contrast, and lens artifacts have been removed. The International Space Station Program supports the laboratory as part of the ISS National Lab to help astronauts take pictures of Earth that will be of the greatest value to scientists and the public, and to make those images freely available on the Internet. Additional images taken by astronauts and cosmonauts can be viewed at the NASA/JSC Gateway to Astronaut Photography of Earth. Caption by M. Justin Wilkinson, Texas State University, Jacobs Contract at NASA-JSC.