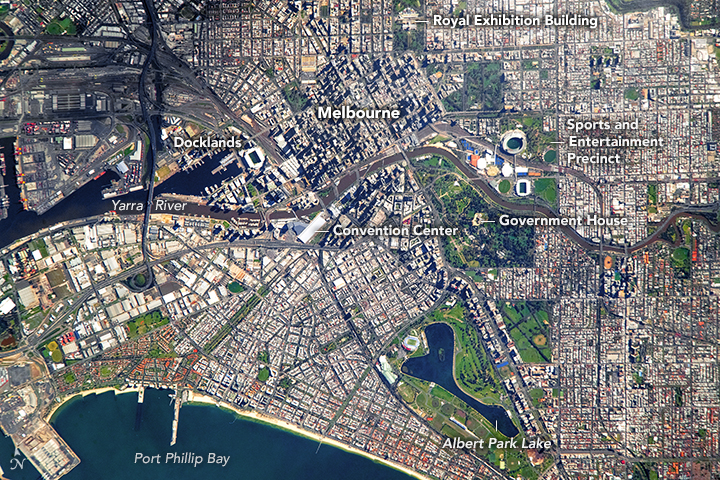 Flying over southeastern Australia, an astronaut aboard the International Space Station took this photograph of the center of Melbourne. With a population of about 4.5 million people (as of 2015), greater Melbourne is the second-most populous city in Australia after Sydney.

The city straddles the Yarra River, which runs through the view as a darker line. Like most high-rise city centers, the center of Melbourne appears darker due to the long shadows cast by closely-spaced, tall buildings. The riverside sector is the tourist and conventioneer magnet; the Convention Center is one of the largest buildings in the neighborhood.

Angular patterns along the river (the Docklands) and the protected shoreline of Port Phillip Bay are transhipment facilities—interchanges between road, rail, and sea transportation. Melbourne is Australia’s busiest container port, with a well-developed railroad and freeway network to distribute goods, as shown by the tracks and highways immediately north of the Docklands.

Green patches in the image are parks, the largest being immediately east of the city center. The Sports and Entertainment Precinct occupies one of these open spaces. It is home to the largest (circular) stadium in the southern hemisphere, the iconic Melbourne Cricket Ground (founded in 1853). On the opposite bank of the Yarra River lies the state governor’s mansion known as the Government House. A smaller park hosts the Royal Exhibition Building, the venue of the first Parliament of Australia. With a design based partly on Florence Cathedral, the building was the first non-Aboriginal cultural site in Australia to win UNESCO’s World Heritage listing.

Various place names reflect the time when Melbourne was founded. At its founding in 1835, the city was named in honor of the British Prime Minister (William Lamb, 2nd Viscount Melbourne). In 1851, it became the capital of the newly founded colony of Victoria, named for the British Queen. Roads and parks are also named after Queen Victoria’s husband Prince Albert.

Astronaut photograph ISS049-E-10665 was acquired on September 23, 2016, with a Nikon D4 digital camera using a 1600 millimeter lens, and is provided by the ISS Crew Earth Observations Facility and the Earth Science and Remote Sensing Unit, Johnson Space Center. The image was taken by a member of the Expedition 49 crew. The image has been cropped and enhanced to improve contrast, and lens artifacts have been removed. The International Space Station Program supports the laboratory as part of the ISS National Lab to help astronauts take pictures of Earth that will be of the greatest value to scientists and the public, and to make those images freely available on the Internet. Additional images taken by astronauts and cosmonauts can be viewed at the NASA/JSC Gateway to Astronaut Photography of Earth. Caption by Andi Hollier, Hx5, and M. Justin Wilkinson, Texas State University, Jacobs Contract at NASA-JSC.

Australia’s second-largest city has an historic past. 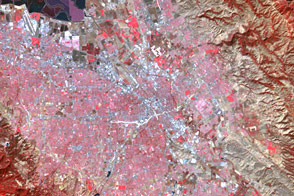