The Curious Incident of Snow in The Netherlands 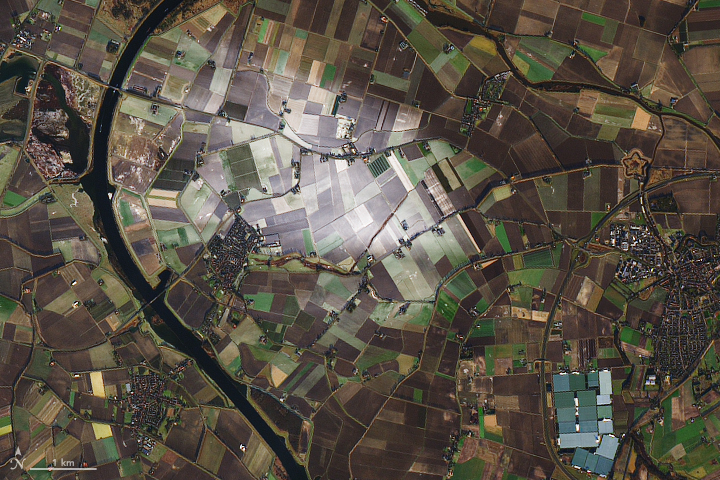 It was as though a spotlight had illuminated them: a few dozen fields in Heensche Molen glowed white. Yet the snow that left a distinct patch on this hamlet in The Netherlands also left neighboring areas untouched, with the landscape cloaked in the muted browns and greens of winter.

Snow fell that January 2017 day in northwestern Europe, but not everywhere. The Netherlands and Belgium were dusted in a freckle-pattern, with white powder covering some fields, while others remained completely bare. The Operational Land Imager (OLI) on Landsat 8 captured a view of this anomaly on January 19, 2017, a couple of days after the snowfall. Those white freckles were signs of a rare and somewhat obscure phenomenon.

Fog-induced snow (not a formal scientific term) typically forms next to industrial sites. Big chimneys release water vapor and other gases and particulates, which can lead to the formation of fog. It also turns out that these emissions can create snow when the weather gets cold enough. 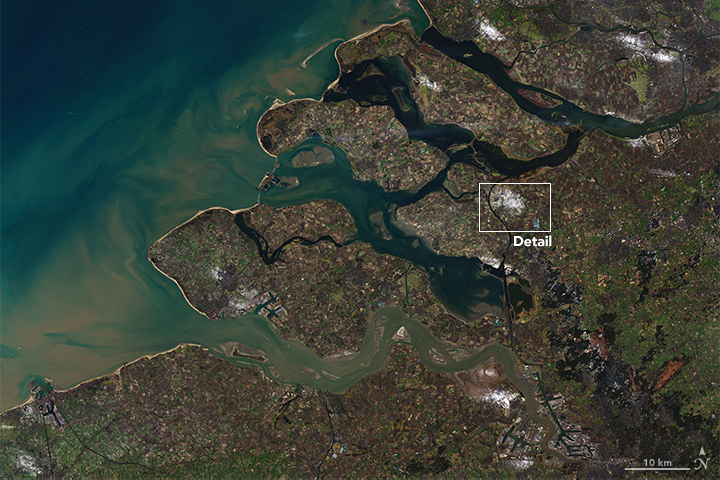 In December 2007, a cold fog over The Netherlands started to develop into a thick stratus cloud. Wim van den Berg, a researcher for MeteoGroup Netherlands, described the event in a 2007 paper: “Mixing within the fog caused the temperature to drop gradually to -4 or -5 degrees Celsius (25 Fahrenheit) throughout the cloud. The temperature decrease caused additional condensation into tiny water droplets but also ice crystals. In such a mixed cloud the Wegener-Bergeron process starts, and ice nuclei grow at the expense of water droplets with small snowflakes as a result...Locally, really large snowflakes were observed and a snow depth resulted of 3–5 centimeters (1.2–2 inches).”

That is likely what happened in January 2017, van den Berg believes. “After many days with fog and/or low clouds and subfreezing temperatures, on January 17 several places reported snow,” he wrote in an email. “It was very local, mostly west of industry,” as surface wind was light easterly, “but it did cause some unexpected slipperiness.”

A rare and somewhat obscure phenomenon visited the country.