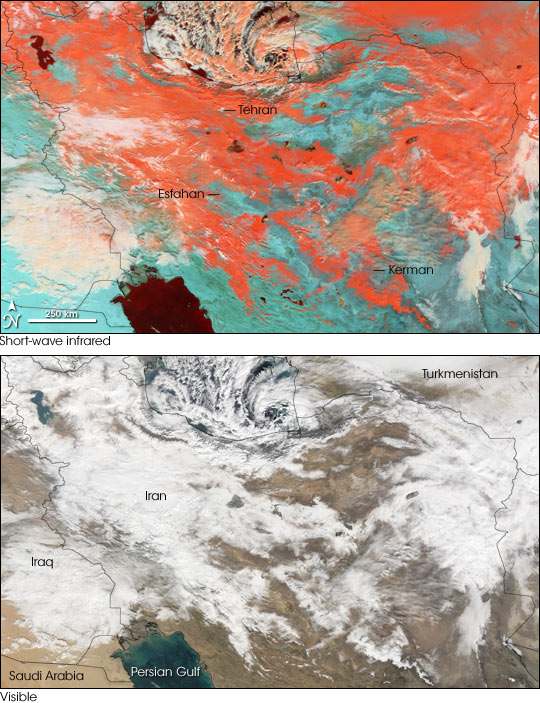 An unusually severe blizzard swept over Iran on January 8, 2008, bringing extreme cold and deep snow to much of the desert country reported BBC News. The Moderate Resolution Imaging Spectroradiometer (MODIS) on NASA’s Terra satellite captured this pair of the images of the snow on January 9. The lower image shows Iran as it would appear to a person looking at it from space. White snow clings to the mountains in a long east-west arc across the country. The full extent of the snow cover is difficult to gauge, however, because of the clouds that linger over the region. It is difficult to distinguish the white snow from the white clouds.

The top image provides a better idea of where snow accumulated during the blizzard. The image was made with both visible light and short-wave infrared. This particular combination of light energy makes snow and ice pop out, since the frozen water is red, while clouds range from white to orange. The snow cover clearly affected several Iranian cities, including Tehran, Esfahan and Kerman. Fingers of snow stretch far into the southern desert, where snow had not previously been seen in living memory, reported BBC news. According to BBC news, 28 people died because of cold or car crashes related to the unusually heavy snowfall.