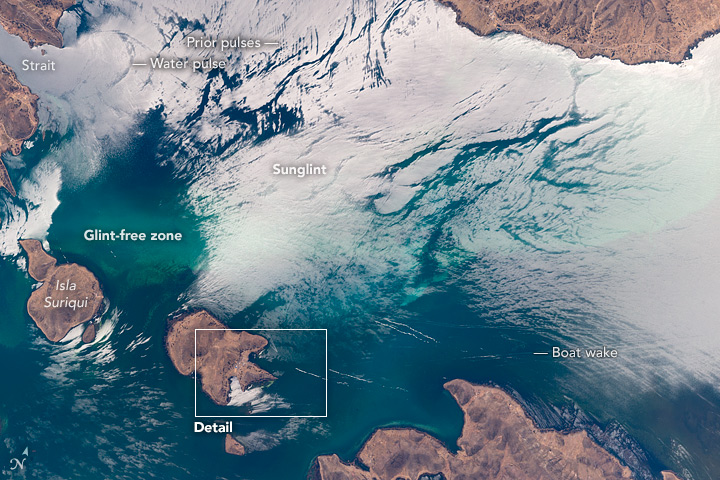 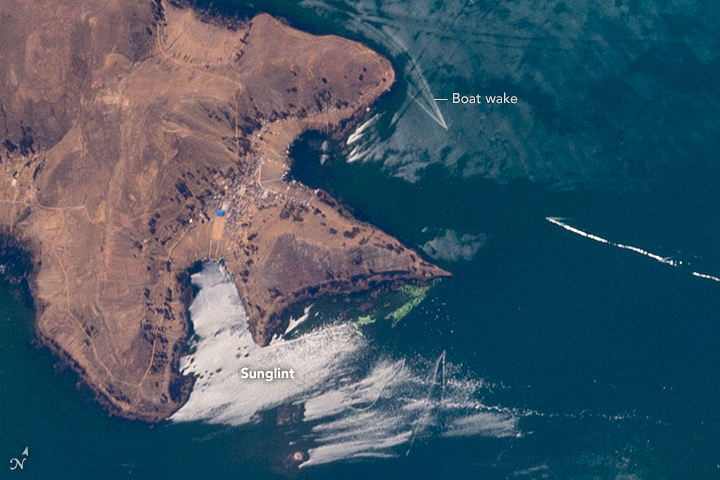 An astronaut aboard the International Space Station used a long lens to capture the fleeting features of the Sun’s reflection point around islands in Lake Titicaca. Located on the high plateau of the Andes Mountains, between Peru and Bolivia, Titicaca is the largest lake in South America. At 3812 meters (12,500 feet) above sea level, it is also one of the highest commercially navigable lakes in the world.

Astronauts see numerous complex “sunglint” patterns like these as they look down on Earth. In this photo, reflection-point patterns are strongly affected by the wind because wind-ruffled water and smooth water reflect sunlight differently. Strong westerly winds blow across Titicaca in most months of the year, disturbing the water surface and enhancing bright reflections. Wind is also channeled between steep-sided islands, making for strong reflections on both sides of Isla Suriqui. But in wind-protected zones—such as the area downwind (northeast) of Suriqui—there is no brilliant reflection to blot out the color of the lake water.

The sunglint patterns tell other stories, too. The curved line near the top left seems to show a pulse of water entering the lake through a narrow strait. The parallel lines at image top center may represent a packet of earlier water pulses.

At the lower right, straight lines of boat wakes cut across curved wind-streak lines. The close-up image shows a cluster of V-shaped wakes of boat traffic going to and from a small port on the island.

Astronaut photograph ISS049-E-1028 was acquired on September 10, 2016, with a Nikon D4 digital camera using an 800 millimeter lens, and is provided by the ISS Crew Earth Observations Facility and the Earth Science and Remote Sensing Unit, Johnson Space Center. The image was taken by a member of the Expedition 49 crew. The image has been cropped and enhanced to improve contrast, and lens artifacts have been removed. The International Space Station Program supports the laboratory as part of the ISS National Lab to help astronauts take pictures of Earth that will be of the greatest value to scientists and the public, and to make those images freely available on the Internet. Additional images taken by astronauts and cosmonauts can be viewed at the NASA/JSC Gateway to Astronaut Photography of Earth. Caption by M. Justin Wilkinson, Texas State University, Jacobs Contract at NASA-JSC.

An astronaut photographed the interplay of light and wind on South America’s largest lake. 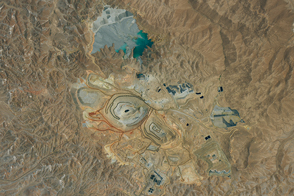