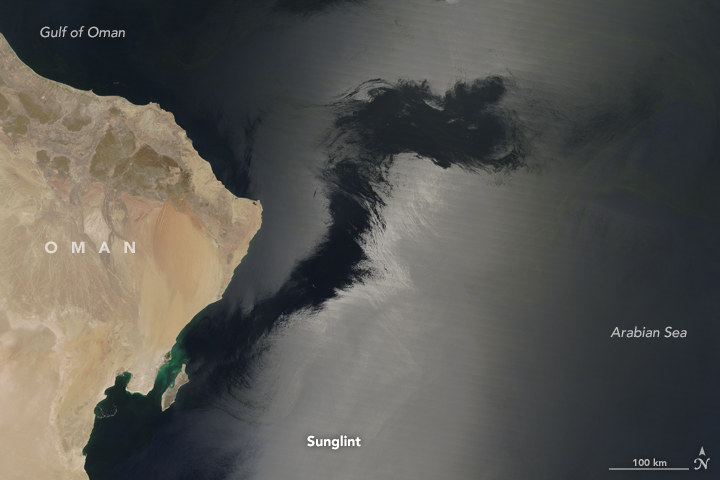 It might look like something mysterious is happening in the waters off of Oman, but this dark, sinuous shape has a completely natural explanation. On April 11, 2017, the Moderate Resolution Imaging Spectroradiometer (MODIS) on NASA’s Terra satellite captured this natural-color image of the Arabian Sea.

Smooth water reflects sunlight like a mirror, particularly when viewed from above. Areas where that light is reflected by the water at the same angle that a satellite views it—when the Sun, the satellite, and the sea are lined up—appear brighter than surrounding areas. Viewed globally, sunglint shows up as long, linear streaks down the center of a swath of satellite data.

This image shows a detailed view of sunglint in the Middle East. What’s interesting is that the sunglint (bright area) is interrupted. Dark areas indicate surface waters that have been roughened by wind, causing sunlight to reflect in many directions. That means less light is reflected directly back toward the satellite. In this way, sunglint can be used to discern phenomena like wind patterns that are not directly visible in natural-color imagery.

The phenomenon is visible from other vantage points as well. Astronauts aboard the International Space Station have captured photographs of sunglint, such as this image of Lake Titicaca. And the sensor does not have to be in space; you can see the interaction of light and water with your eyes, such as this “glitter path” observed at a beach in California.

Glint of the Irrawaddy Delta

Sunlight traces the mouth of one of Asia’s great rivers—a major artery for commercial and sediment transport.