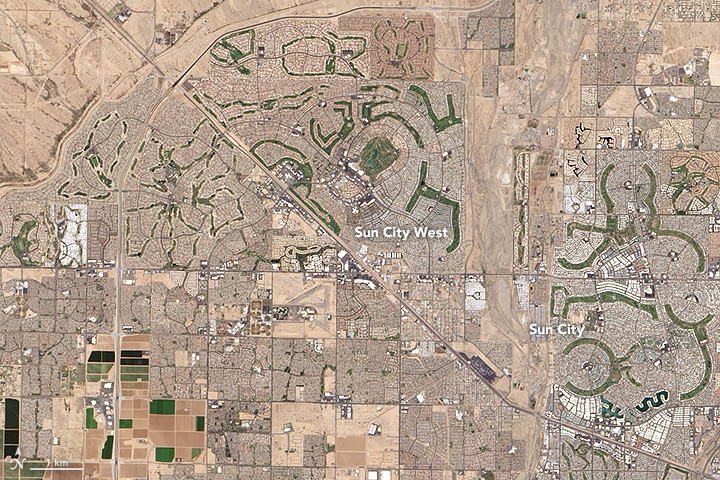 When the real estate developer Del Webb conceived Sun City in the 1950s, the goal was something unheard of at that time: build a retirement community specifically for adults. It was fitting, then, that the layout of the community be equally distinctive.

Amidst the rectangular grids that make up most neighborhoods in the greater Phoenix area, Sun City’s radial streets, curving lines of homes, and verdant golf courses are hard to miss when seen from above. At the center of the circular neighborhoods are community buildings: mainly churches, with a few stores and health care facilities mixed in. Pools, tennis courts, pickle ball courts, and bowling alleys are squeezed in between the many single-levels homes that dominate Sun City.

The retirement community concept proved wildly successful when Sun City was unveiled in 1960 with just five model homes, a recreation center, one golf course, and one shopping center. The opening weekend drew more than 100,000 people—far more than expected—and inspired a cover story in Time. Decades later, the age-restricted community has seven pools, eight golf courses, and some 40,000 residents.

Sun City proved so successful that several more retirement communities were built just to the west. A few of them include golf courses with distinctive layouts that are reminiscent of flowers when viewed from above.

The Operational Land Imager (OLI) on Landsat 8 captured this image of Sun City, Arizona, on May 25, 2016.

The radial streets of one of America’s first large-scale retirement communities gives this part of Phoenix a distinctive look when seen from above.