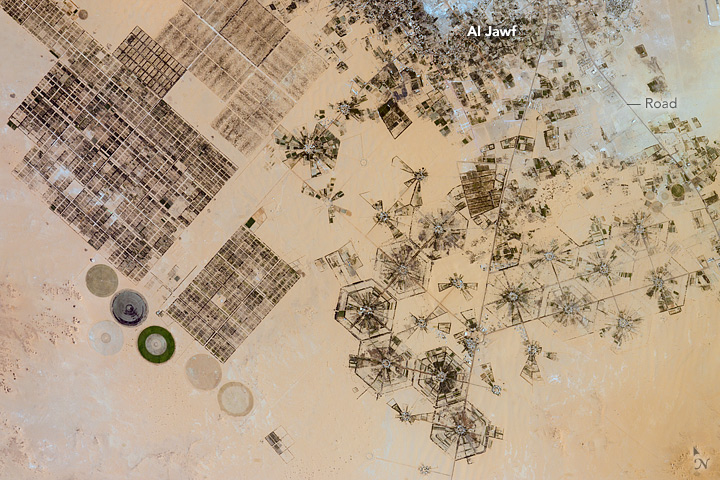 Astronauts aboard the International Space Station used an 1150 mm lens to capture this photograph of a variety of agricultural patterns near an oasis in eastern Libya. This area is one of the most remote places in Africa, more than 900 kilometers (560 miles) from the nearest major city. The cluster of buildings, roads, and small farming operations near the top of the photo is the town of Al Jawf.

Each farming pattern in the image is related to different irrigation methods. The honeycombs in the center are what remains of the first planned farming method in the Libyan Desert, implemented around 1970. The large circles (about 1 kilometer wide) of center-pivot irrigation systems (lower left) replaced the honeycombs in order to conserve water. The grid system (upper left) is perhaps one of the oldest known to planned agriculture, but it is still used alongside the more modern patterns. (This wider view shows the full extent of the oasis.)

Near Al Jawf, the oasis is covered in lush green gardens and palm trees that survive due to pumping from the largest known fossil water aquifer in the world: the Nubian Sandstone Aquifer. More than 20,000 years ago, the Saharan landscape was wet, and heavy rainfall continuously refilled the aquifer. Today the region receives less than 0.1 inches of rain a year, making this aquifer a non-renewable resource. An agreement was recently hashed out between Libya and the UN Food and Agriculture Organization to improve food security in the region by developing the country’s agriculture industry. This means the use of fossil water will continue, and the agricultural patterns we see today are likely to survive for years to come.

Astronaut photograph ISS049-E-43349 was acquired on October 22, 2016, with a Nikon D4 digital camera using an 1150 millimeter lens, and is provided by the ISS Crew Earth Observations Facility and the Earth Science and Remote Sensing Unit, Johnson Space Center. The image was taken by a member of the Expedition 49 crew. The image has been cropped and enhanced to improve contrast, and lens artifacts have been removed. The International Space Station Program supports the laboratory as part of the ISS National Lab to help astronauts take pictures of Earth that will be of the greatest value to scientists and the public, and to make those images freely available on the Internet. Additional images taken by astronauts and cosmonauts can be viewed at the NASA/JSC Gateway to Astronaut Photography of Earth. Caption by Andi Hollier, Hx5 LLC, and M. Justin Wilkinson, Texas State University, Jacobs Contract at NASA-JSC.