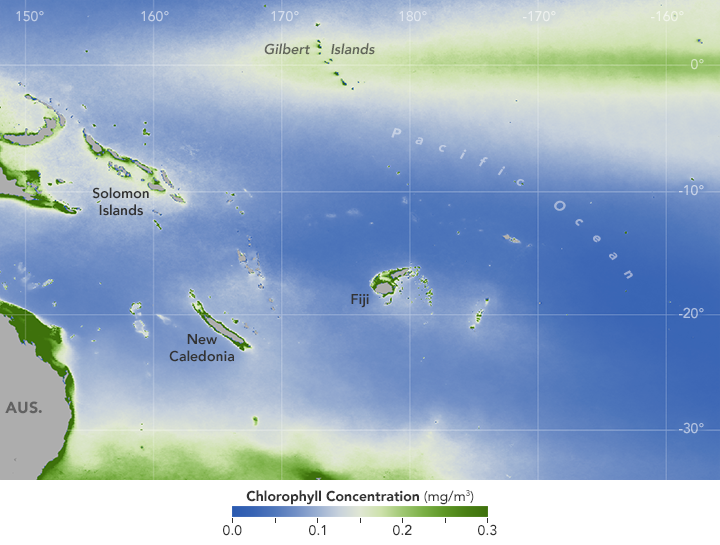 In the middle of most ocean basins, far from nutrient-laden coastal upwelling and river outflows, life is sparse. Few fish reside here, and even the smaller lifeforms like phytoplankton are few and far between.

Coral islands, however, buzz with aquatic activity. Particularly in the vast Pacific Ocean, it is as though these islands have a life-sustaining halo extending dozens of kilometers and invigorating otherwise barren waters. A recent study published in Nature Communications shows that coral reefs and atolls seem to provide enough nutrients to sustain biological hot spots far beyond their immediate vicinity.

Scientists have long known of the “island mass effect,” (IME)—when the qualities of ecologically productive islands extend into nutrient-depleted waters. But they did not know just how prevalent the effect was, or just how much credit to give phytoplankton for injecting life into surrounding areas. The study found that the vast majority (more than 90 percent) of coral reef islands and atolls raise biological diversity in the ocean around them. In fact, there is an average of 86 percent more phytoplankton on the outer fringes of these reefs than would otherwise be expected.

“There’s been sort of a longstanding paradox in how island reef ecosystems are so productive when their surrounding environment isn’t,” said Jamison Gove, lead author of the paper and research oceanographer in NOAA’s Ecosystems and Oceanography Division. The field of study is roughly 60 years old, “But this is the first research to show that IME is a ubiquitous phenomenon.”

The image above depicts sea surface chlorophyll in the Pacific Ocean between July 2002 and June 2012. The map was made using data acquired by the Moderate Resolution Imaging Spectroradiometer (MODIS) on NASA’s Aqua satellite. Green areas correlate to higher chlorophyll (in milligrams per cubic meter), an indication of blooming phytoplankton. Blue areas indicate lower concentrations of chlorophyll and phytoplankton.

The swath of green at the equator is an area of ocean upwelling known as the equatorial cold tongue, and it brings colder, nutrient-rich water from the depths to the surface. At the northeastern tip of Australia, there is another thick lip of green. However, the strong signal here may be due in part to bottom reflectance in shallow waters, which appears similar to chlorophyll by satellites. (Authors accounted for reflectance in the study area.)

In many ways, the island mass effect resembles larger ocean upwelling events. When ocean currents and waves encounter an island, they flow around it, and deep, nutrient-rich water is jolted upward in currents. This stirring of the water column fosters biological activity. Such hot spots (shown in green) appear around the majority of islands in the Pacific, indicating high chlorophyll values in these places.

Activity around the Gilbert Islands stands out. The islands themselves are far smaller than the green splotches surrounding them. The abundance of phytoplankton indirectly indicates the presence of other aquatic life as well—including squid, small fish, and larger predators like tuna—that consume phytoplankton or each other.

By extension, people rely on those microscopic plankton for their food, Gove said. “The more we understand productivity in these ecosystems, the more we can think about future changes and how these communities stand to benefit or not as the climate changes.”