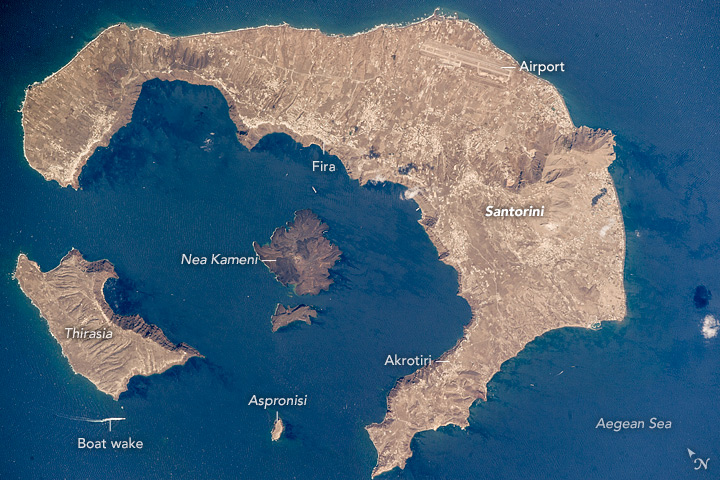 The islands in this photograph (taken from the International Space Station) are arranged in an oval shape. They are all that remains of what was once a large, circular volcano.

The largest island in the ring is the tourist mecca of Santorini (also known as Thira), while the other islands are Thirasia and Aspronisi. The three pieces are what remains after an enormous eruption destroyed most of a volcanic island. Water from the Aegean Sea rushed in to fill the void, forming the central, 12 kilometer-long (7.5 mile) lagoon.

The lagoon is surrounded by high, steep cliffs on three sides. Several towns occupy the top of these impressive, near-vertical cliffs (roughly 300 meters, or 1,000 feet), appearing as white stipple patterns from the traditional whitewash paint that is almost exclusively used on these islands.

Santorini is one of the most famous tourist islands on Earth. Ships arrive at the bottom of the cliffs near the town of Fira. Tourists then climb a switchback road up the cliffs to the town—a classic Greek village on a cliff face looking out into the great lagoon.

West of Fira, the water has a darker, ruffled texture from wind streaking across the lagoon on the downwind side of the islands. The wake of a boat also appears between Thirasia and Aspronisi.

The caldera explosion that made this lagoon is one of the largest known to geologists. An estimated 100 cubic kilometers of material blew out of the volcano, four times as much as the well-recorded eruption by Krakatoa in 1883. Santorini has been designated a “Decade Volcano” because it poses more than one volcanic hazard to people living near it.

The date of the Santorini explosion has been carefully researched and is now known to have taken place between 1600 and 1627 BCE. Archaeological excavations at the town of Akrotiri are revealing exciting remains of a Minoan-age town with streets, three-story houses, and frescoes well preserved under ash layers, much like those preserved at Pompeii.

Since the volcano is still active, the central peak has grown and then erupted repeatedly. Nea Kameni is the most recent peak of the underwater volcano to appear above water (popping up in 1707). There have been three eruptions in the twentieth century alone. Recent lava flows appear as dark-toned areas, compared with the lighter-toned surfaces of the older outer islands.

Astronaut photograph ISS048-E-72284 was acquired on September 3, 2016, with a Nikon D4 digital camera using a 800 millimeter lens, and is provided by the ISS Crew Earth Observations Facility and the Earth Science and Remote Sensing Unit, Johnson Space Center. The image was taken by a member of the Expedition 48 crew. The image has been cropped and enhanced to improve contrast, and lens artifacts have been removed. The International Space Station Program supports the laboratory as part of the ISS National Lab to help astronauts take pictures of Earth that will be of the greatest value to scientists and the public, and to make those images freely available on the Internet. Additional images taken by astronauts and cosmonauts can be viewed at the NASA/JSC Gateway to Astronaut Photography of Earth. Caption by M. Justin Wilkinson, Texas State University, Jacobs Contract at NASA-JSC.

The islands of this tourist mecca are actually the rim of an old volcano. 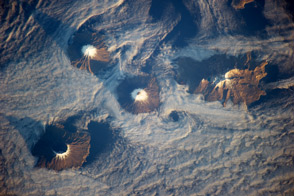