When John Wesley Powell explored the Colorado River in 1869, he made the first thorough survey of one of the last blank spots on the map. The expedition began in May at Green River, Wyoming, and ended three months later at the confluence of the Colorado and Virgin Rivers in present-day Nevada.

About two months into their journey, the nine men of the expedition found themselves in Glen Canyon. As the men traveled along the serpentine river channel, they encountered what Powell later described in Canyons of Colorado as a “curious ensemble of wonderful features.”

While the walls were not nearly as high in Glen Canyon as they were downstream in Marble Canyon or Grand Canyon, the explorers encountered a labyrinth of overhanging cliffs, hanging gardens, sweeping river bends, and natural arches set amidst a backdrop of colorful buttes and mesas.

“Past these towering monuments, past these mounded billows of orange sandstone, past these oak-set glens, past these fern-decked alcoves, past these mural curves, we glide hour after hour, stopping now and then, as our attention is arrested by some new wonder,” wrote Powell.

From above, the view of Glen Canyon is equally arresting. In 2016, an astronaut aboard the International Space Station took several photographs that were combined to make this long mosaic. The water has an unnatural shade of blue because of sunglint, an optical phenomenon that occurs when sunlight reflects off the surface of water at the same angle that a camera views it.

One of the most prominent features in this stretch of the Colorado is the Rincon, an entrenched and abandoned meander, or loop, in the river. Geologists believe it formed several thousand years ago when the river cut straight across the ends of the loop and shortened its course by 6 miles (10 kilometers).

The modern view is rather different than what members of Powell’s expedition likely would have seen. When the Glen Canyon Dam was finished in 1963, water levels began a slow rise, submerging many of the geological features—including an acoustically remarkable side canyon called Music Temple—that Powell found so compelling. Due to drought and the presence of porous rock in this area, it a took a full 17 years for the reservoir (Lake Powell) to reach its maximum capacity.

The astronaut photographs ISS047-E-106206 — ISS047-E-106225 in this mosaic were acquired on May 7, 2016, with a Nikon D4 digital camera using a 800 millimeter lens, and are provided by the ISS Crew Earth Observations Facility and the Earth Science and Remote Sensing Unit, Johnson Space Center. The images were taken by a member of the Expedition 47 crew. The images have been cropped and enhanced to improve contrast, and lens artifacts have been removed. The International Space Station Program supports the laboratory as part of the ISS National Lab to help astronauts take pictures of Earth that will be of the greatest value to scientists and the public, and to make those images freely available on the Internet. Additional images taken by astronauts and cosmonauts can be viewed at the NASA/JSC Gateway to Astronaut Photography of Earth. Caption by Adam Voiland. 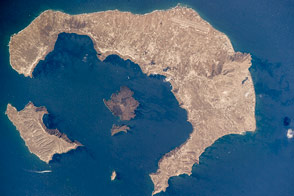