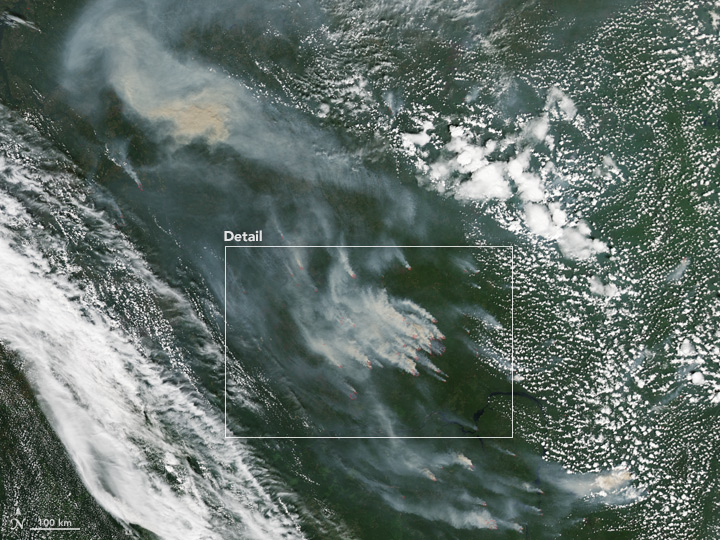 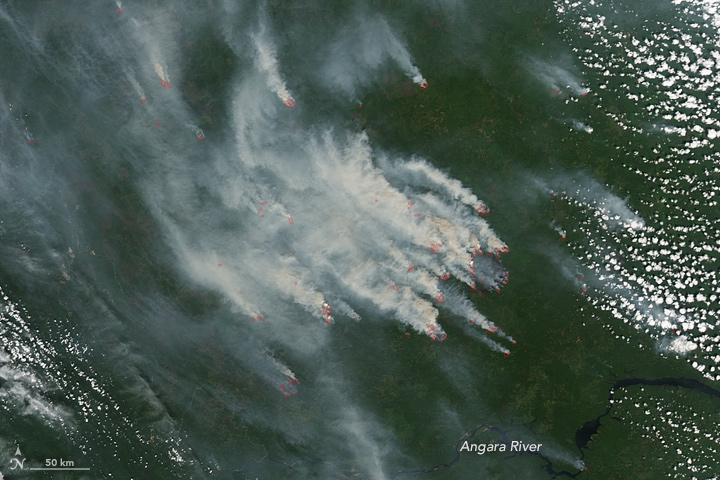 These natural-color images were acquired by the Moderate Resolution Imaging Spectroradiometer (MODIS) on NASA’s Aqua satellite on June 29, 2016. Red outlines indicate hot spots where MODIS detected warm surface temperatures associated with fire. Notice the lack of clouds around the fires in the upper image; it is possible that heat rising from the fires has prevented the formation of clouds. The lower image highlights a cluster of intense fires north of the Angara River.

The MODIS sensor first detected large numbers of hot spots in this area on June 19, 2016, with several isolated fires growing and multiplying over the following days. According to reporting by Komsomolskaya Pravda, many of the fires were triggered by lightning storms. More than 600 people have been involved in fighting the blazes.

The fires are located in geographically isolated areas and do not pose threats to population centers, the newspaper reported. The closest cities, Miryuga and Koyumba, are roughly 80 kilometers (50 miles) from the fires. The Koyumba-Taishet pipeline, which should become operational this fall, is located about 30 kilometers (20 miles) to the east.

Aqua was not the only satellite to capture imagery of these fires. The Cooperative Institute for Research in the Atmosphere at Colorado State University posted an animation that shows the fires intensifying rapidly on June 28, 2016. Himawari-8, a Japanese weather satellite, collected the imagery used in the animation.