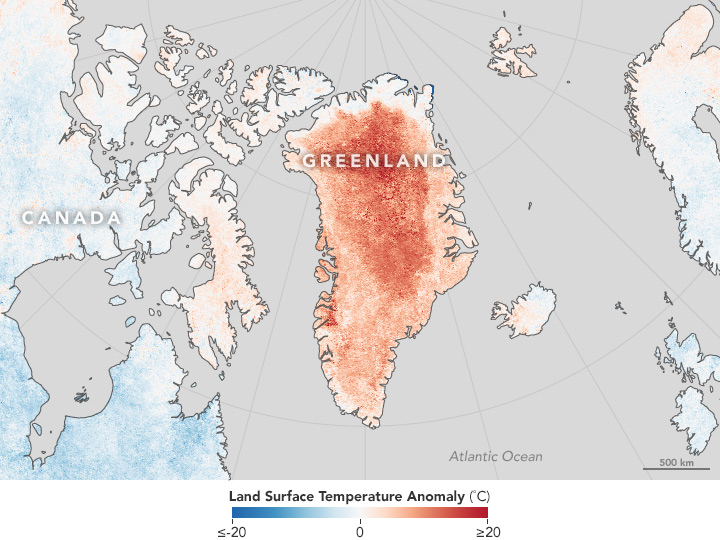 April in Greenland is typically very cold, though some years buck the trend. In 2012, for example, the surface of the ice sheet started melting early and then experienced the most extensive melting since the start of the satellite record in 1978. Weather events and temperature anomalies this April suggest that 2016 may be off to a similar start.

The map above shows land surface temperatures for April 2016 compared to the 2001–2010 average for the same month. Red areas were hotter than the long-term average; some areas were as much as 20 degrees Celsius (36 degrees Fahrenheit) warmer. Blue areas were below average, and white pixels had normal temperatures. Gray pixels were areas without enough data, most likely due to excessive cloud cover.

This temperature anomaly map is based on data from the Moderate Resolution Imaging Spectroradiometer (MODIS) on NASA’s Terra satellite. Observed by satellites uniformly around the world, land surface temperatures (LSTs) are not the same as air temperatures. Instead, they reflect the heating of the surface by sunlight, and they can sometimes be significantly hotter or cooler than air temperatures.

“The most remarkable aspect here is the incredible departure from 2001-2010 average, especially deep in the ice sheet interior,” said Santiago de la Peña, a research scientist at Ohio State University. “This is accentuated by the fact that the northern regions of the United States and Canada actually experienced cooler than usual temperatures.”

According to de la Peña, a high-pressure weather system sat over the ice sheet through most of April. The system caused temperatures across Greenland to spike, reaching or matching record temperatures in many places. “There have been occasional warming events in the past during spring over Greenland,” he noted, “but they affected only local areas and were not as intense.”

Still, warming events in Greenland are not entirely without precedent. Research by Dorothy Hall, an emeritus scientist at NASA’s Goddard Space Flight Center, has showed that major melt events like those in 2012 and 2002 are not uncommon.

De la Peña thinks such events will become more common in the future as atmospheric warming in the Arctic brings about longer melt seasons. For now, he notes that it is still early to predict how the melt season in 2016 will unfold. “High temperatures are still being recorded in May, suggesting we will have major melt events during the summer.”