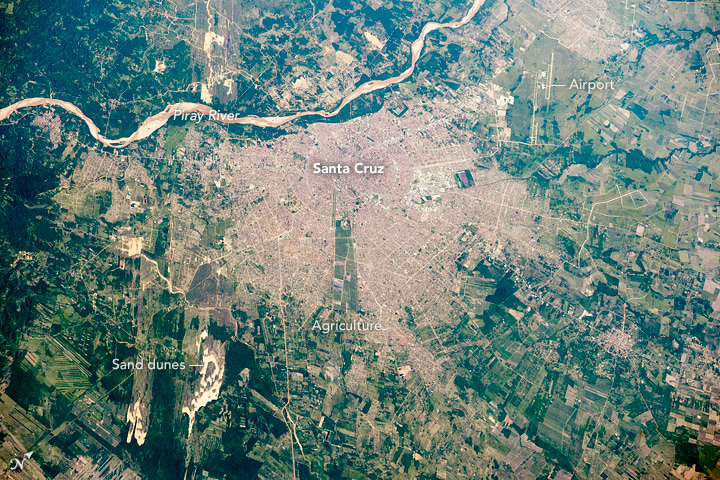 An astronaut aboard the International Space Station (ISS) took this photograph of the city of Santa Cruz. The city’s full name is Santa Cruz de la Sierra because it lies just east of the Andes Mountains in the hot, tropical lowlands of east-central Bolivia.

Flying at 27,600 kilometers (17,150 miles) per hour, astronauts must quickly recognize features on the ground. In this case, the eye is drawn to the gray-brown line of the Piray River and to the great patch of pink roof tiles. Santa Cruz has a classical layout—a series of straight radiating boulevards and concentric ring roads focused on the ancient city center. The Piray River supplies the city’s water, so the center was established near its bank. The river’s wide, sandy floodplain controls the shape of the modern city, restricting its growth westward. A long thin remnant of agricultural fields (center) has been isolated by the recent urban growth.

The Santa Cruz metropolitan area (2 million people) is one of the fastest-growing cities in the world. Recent growth has largely come from the expansion of agriculture—especially soybeans, sugar cane, and rice—and from petroleum and natural gas extraction. Manufacturing operations in the city produce soybean oil, dairy and meat products, wood products, leather, and alcohol. Oil and sugar refineries are also important. The city’s international airport (top right) is the country’s busiest.

Earlier courses of the Piray River appear in several parts of the image. These relict courses show that the river has flowed northwest (top left), northeast (green channels near the airport), and east (green channels, lower right). By switching its courses, the Piray has built the vast plain of fertile river sediment where the city and farmland now lie. Strong winds occasionally blow sand out of the river bed, making elongated dune fields (lower left and top left).

Astronaut photograph ISS046-E-19670 was acquired on January 23, 2016, with a Nikon D4 digital camera using a 400 millimeter lens, and is provided by the ISS Crew Earth Observations Facility and the Earth Science and Remote Sensing Unit, Johnson Space Center. The image was taken by a member of the Expedition 46 crew. The image has been cropped and enhanced to improve contrast, and lens artifacts have been removed. The International Space Station Program supports the laboratory as part of the ISS National Lab to help astronauts take pictures of Earth that will be of the greatest value to scientists and the public, and to make those images freely available on the Internet. Additional images taken by astronauts and cosmonauts can be viewed at the NASA/JSC Gateway to Astronaut Photography of Earth. Caption by M. Justin Wilkinson, Texas State U., Jacobs Contract at NASA-JSC.