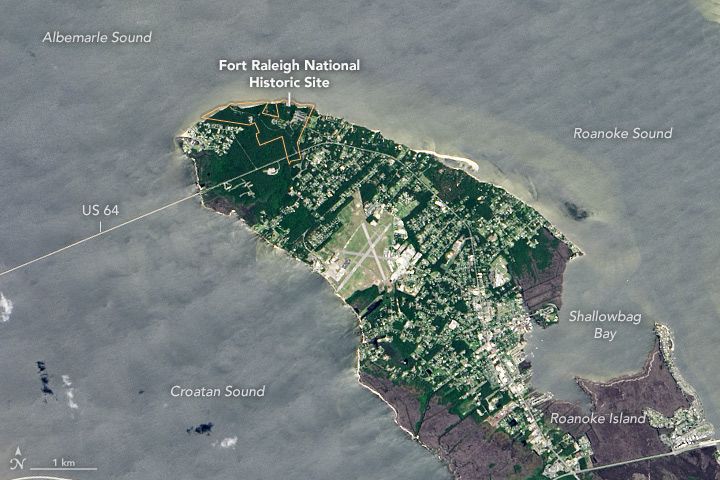 In the early 1600s, the English established their first permanent settlements in North America at Jamestown, Virginia, and then Plymouth, Massachusetts. But those were not their first attempts to colonize America. In the late 16th century, settlers started a colony on Roanoke Island, North Carolina. The disappearance of that colony remains a mystery today.

On June 7, 2015, the Operational Land Imager (OLI) on Landsat 8 captured this natural-color image of the northern half of Roanoke Island, which is tucked between North Carolina’s mainland and barrier islands. Fort Raleigh National Historic Site, which was established 75 years ago on the island’s northern shore, spans aquatic habitats, swamp forests, and a rare maritime evergreen forest. Fort Raleigh also preserves relics of England’s first attempts to colonize the New World, as well as the history Native Americans, European Americans, and African Americans on Roanoke Island.

The events that took place within the boundaries of the historic site are subject to debate. Initially, archaeologists thought that the northern part of the island was the main settlement of more than 100 English colonists who arrived in 1587. They based their claim on some European artifacts found within the historic site. But the artifacts were not indicative of habitation, and some experts speculate that the main settlement and fort were located farther south, near Shallowbag Bay. In that bay, ships would have been sheltered and the settlers could more easily offload supplies.

In any case, the island’s entire settlement was found deserted in 1590. The story of the so-called “Lost Colony,” as interpreted by playwright Paul Green, has been performed since 1937 at Fort Raleigh’s beachfront theater, visible as a small tan fleck near the shoreline. Researchers have theorized that some of the settlers relocated about 80 kilometers (50 miles) south to Hatteras Island. Other clues uncovered in 2012 from an old map suggest that some colonists might have ventured inland.

At Fort Raleigh you can also learn about the culture of the Algonquians, the natives who long inhabited the area, cultivated the land, and fished in the sounds long before Europeans arrived. Or read about a colony established centuries later during the Civil War, when more than 1,000 people—former slaves and families—found refuge on Roanoke.