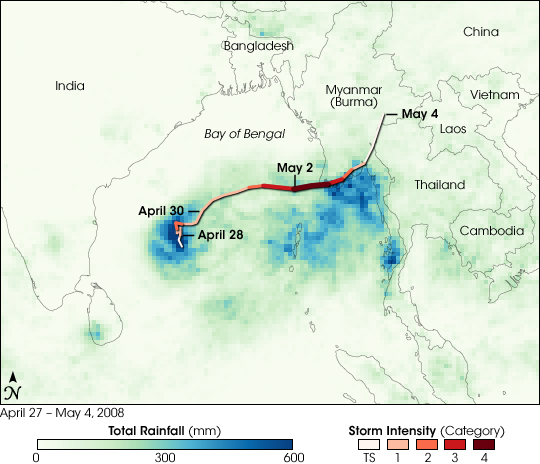 Many of the coastal areas around the Bay of Bengal are densely populated and prone to flooding, making it easy for natural hazards—unusually heavy monsoon rains, tsunamis, or cyclones—to become natural disasters. A disaster unfolded in Burma (Myanmar) in early May 2008, as Cyclone Nargis swept over the Irrawaddy River Delta, pummeling the area with high winds, storm surge, and heavy rains.

This image shows rainfall accumulations along Cyclone Nargis’ path between April 27 and May 4, 2008, based on data from the Tropical Rainfall Measuring Mission (TRMM) satellite. Rainfall totals range from 0 (palest green) to 600 millimeters, which is just under 2 feet (dark blue). The path of the storm and its strength on various dates are shown as colored line segments (off-white to dark red).

The first area of 600-millimeter rainfall totals occurred over the open waters of the Bay of Bengal, as the storm was intensifying from a Tropical Storm to a Category 2 cyclone. Nargis weakened to Category 1 as it moved east-northeast toward Burma, but by May 2, it had re-intensified. When it made landfall over the Mouths of the Irrawaddy River, it was a borderline Category 3/4 storm. Here, Nargis inundated a second area with up to 600 millimeters of rain. The amount of rain was more than double the average rainfall the area would typically receive in that time span. When the skies cleared on May 5, satellites observed widespread flooding over thousands of square kilometers. (Storm surge likely played a role in coastal flooding, too.)

As of May 7, 2008, the number of people killed was estimated at more than 22,000, according to news reports citing the national government, with twice that many people still missing and feared dead.