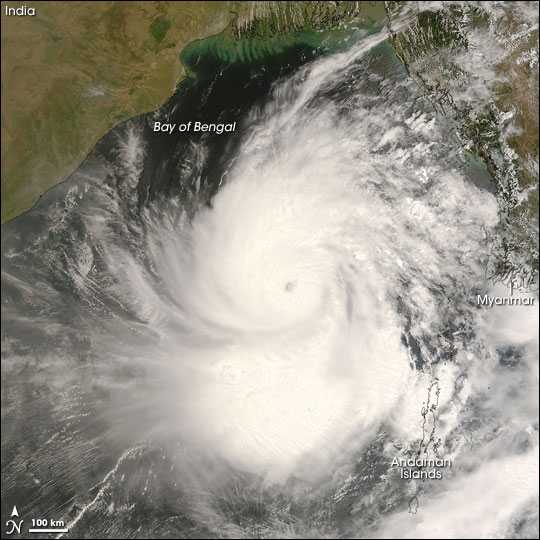 On May 1, 2008, Typhoon Nargis hovered over the Bay of Bengal, having become a very severe cyclonic storm. A report issued by the U.S. Navy Joint Typhoon Warning Center at 15:00 UTC (approximately 9:00 p.m. local time) stated that the storm had intensified significantly over the previous six hours and was expected to come ashore in Burma (Myanmar) in the evening of May 2.

The Moderate Resolution Imaging Spectroradiometer (MODIS) on NASA’s Terra satellite acquired this image at 4:40 UTC (10:40 a.m. local time) on May 2, 2008. In this image, the sprawling storm spirals over the bay, between India in the west and Burma in the east. Bangladesh lies directly north of the storm. The storm appears to skirt the Andaman Islands in the southeast.

On May 1, Nargis had sustained winds of 90 knots, which would make it a Category 3 hurricane on the Saffir-Simpson hurricane scale, used to rank hurricanes in the United States. According to Voice of America News, even though the storm was predicted to make landfall in Burma, the cyclone’s proximity to Bangladesh caused serious concern in that nation as well, where memories lingered of the devastating Tropical Cyclone Sidr, which struck in 2007.

Just north of Nargis, along the coast of Bangladesh, are the Mouths of the Ganges—home to the Sundarbans, a massive mangrove forest. Mangrove forests can provide some protection to coastal regions during severe cyclones.

In this image, the sprawling storm spirals over the bay, between India in the west and Burma in the east.

A ragged-looking Tropical Storm Bijli draped the east coast of India in this image from the Moderate Resolution Imaging Spectroradiometer (MODIS) on NASA’s Terra satellite on April 16, 2009