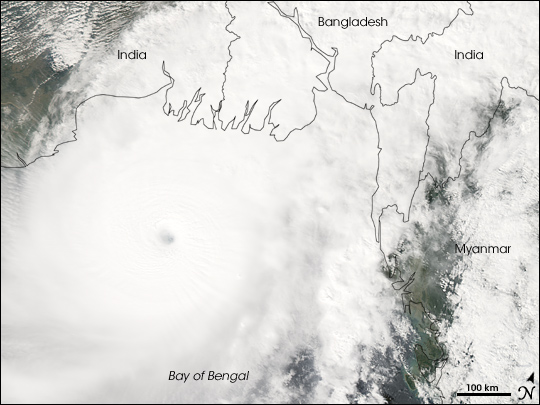 Tropical Cyclone Sidr was moving north toward the Mouths of the Ganges at a speed of 17 kilometers per hour (10 miles per hour) on November 15, 2007. Winds in the storm’s center were raging at 240 km/hr (150 mph), making it a very strong Category 4 tropical cyclone, according to the Joint Typhoon Warning Center.

The Moderate Resolution Imaging Spectroradiometer (MODIS) on NASA’s Aqua satellite acquired this photo-like image at 1:25 p.m. local time (6:55 UTC) on November 15, 2007. With its densely wound clouds and distinct eye, Tropical Cyclone Sidr has the appearance of a well-developed system. The northernmost fringes of the storm already cloud the skies over Bangladesh and India.

Western Bangladesh, where the storm appeared to be headed as of November 15, is the most heavily populated low-lying area in the world, with a history of severe causalities from previous storms due to both direct flooding and storm surge. The Joint Typhoon Warning Center predicted that the storm would weaken as it made landfall, but would maintain hurricane-force winds well after it moves inland. In 1970, a Category 3 storm that made landfall in the same vicinity caused 300,000 deaths and was one of the most deadly natural disasters in modern history. Another 138,000 people perished in 1991 from a similar cyclone.