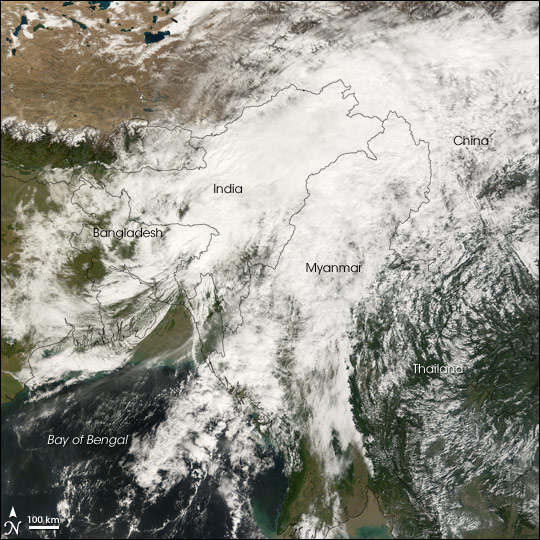 Tropical Cyclone Sidr had been moving slowly north and gathering power as it drew closer to the coastline around the Mouth of the Ganges. However, in the hours before landfall, according to the Joint Typhoon Warning Center, the powerful Category 4 cyclone lost strength and picked up its speed. As of November 16, peak winds had fallen to 110 kilometers per hour (70 miles per hour) and the storm was moving inland at 50 km/hr (30 mph).

The Moderate Resolution Imaging Spectroradiometer (MODIS) on NASA’s Terra satellite acquired this photo-like image at 11:35 a.m. local time (6:05 UTC) on November 16, 2007. The storm appears to have no particular organization, dramatically different from just one day earlier, when it was an unmistakably powerful cyclone.

As of November 16, sources such as the International Herald Tribune were reporting casualties from Sidr of perhaps 200 people in Bangladesh. India was largely spared from the storm. Evacuations had removed hundreds of thousands of people in both countries ahead of the storm. The storm surge and rain did flood many areas, overwhelming some protective dikes, burying fields under water, and washing away many mud homes in the coastal area. Power lines were toppled in many areas, and all of Bangladesh was without power for several hours during the height of the storm.

Western Bangladesh, where the storm made landfall, is the most heavily populated low-lying area in the world, with a history of severe causalities from previous storms due to both direct flooding and storm surge. In 1970, a Category 3 storm that made landfall in the same vicinity caused 300,000 deaths and was one of the most deadly natural disasters in modern history. Another 138,000 people perished in 1991 from a similar cyclone.