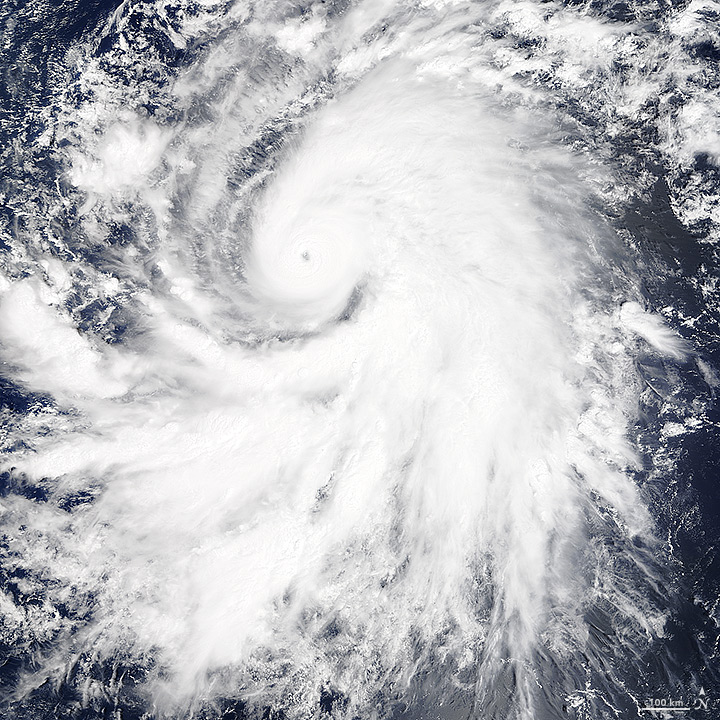 At 19:35 UTC on October 19, 2015, the Moderate Resolution Imaging Spectroradiometer (MODIS) on NASA’s Terra satellite acquired this image of Hurricane Olaf over the Pacific Ocean. When this image was acquired, the hurricane was a Category 2-strength storm with maximum sustained winds of about 85 knots (97 miles/157 kilometers per hour). Within twelve hours, Olaf had strengthened into a Category 4 storm.

All of the storms except for one—Hurricane Joaquin—have occurred over the Pacific Ocean. Meteorologists attribute the increase in activity in the Pacific basin and the decrease in the Atlantic basin to the ongoing El Niño, which has reduced wind shear in the central and eastern Pacific and increased shear in the Atlantic. Strong wind shear prevents storms from getting organized.

Meteorologists do not expect Olaf to hit land, though it could stir up surf in Hawaii.

Hurricane Olaf broke records by becoming the 21st Category 4 or 5 storm of 2015.