Trio of Hurricanes Over the Pacific Ocean 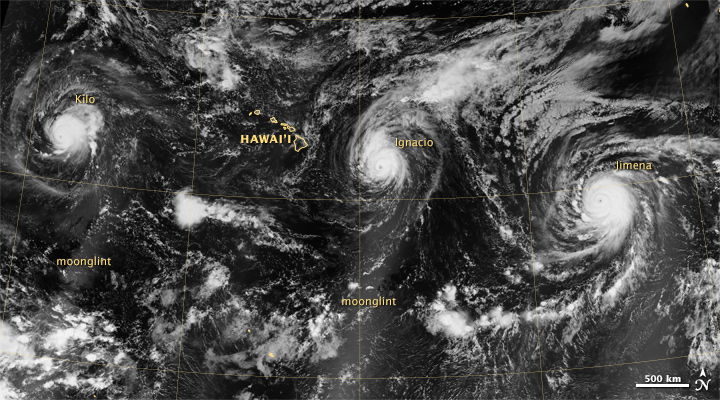 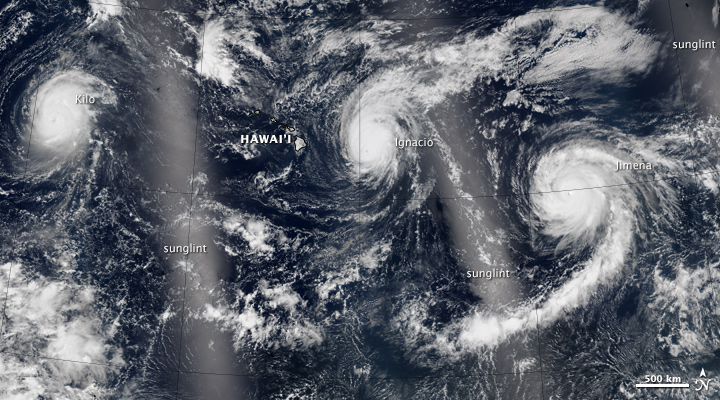 Hurricanes traversing the Pacific Ocean are often solitary storms. Occasionally they show up in pairs. But according to meteorologists, August 2015 marked the first time in recorded history that three Category 4 storms simultaneously paraded over the central and eastern Pacific.

The top image shows a nighttime view of hurricanes Kilo, Ignacio, and Jimena (from west to east). The image is a mosaic, based on data collected during three orbital passes of the Visible Infrared Imaging Radiometer Suite (VIIRS) on the Suomi-NPP satellite. The VIIRS “day-night band” detects light in a range of wavelengths from green to near-infrared, and uses light intensification to enable the detection of dim signals.

Moonlight from a full Moon was favorable for these nighttime images, acquired between 11:30 p.m. and 3 a.m. Hawaii Standard Time on August 29-30 (09:30 and 13:00 Universal Time on August 30). At the time, all three hurricanes were Category 4 storms—the second-highest ranking on the Saffir-Simpson Hurricane Wind Scale.

The second image shows the storms about 12 hours later during daylight hours. This natural-color image is also a mosaic, acquired with VIIRS between about 11 a.m. and 2 p.m. Hawaii Standard Time on August 30 (21:00 and 00:00 Universal Time on August 30-31). Turn on the image comparison tool to see the path followed by each storm. The bright areas in the daytime image are due the mirror-like reflection of sunglint.

For the first time in recorded history, three Category 4 storms lined up over the central and eastern Pacific Ocean.