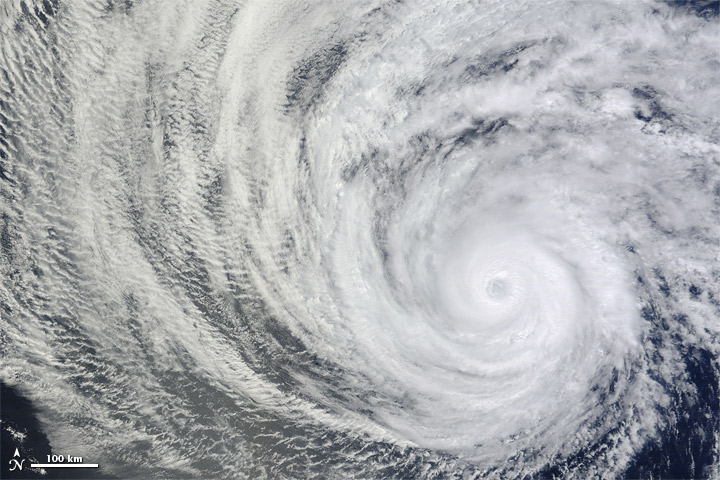 In early July 2012, two simultaneous hurricanes blew over the eastern Pacific Ocean: Hurricane Emilia and Hurricane Daniel. The first of the two storms to form, Daniel started as a tropical depression on July 4. The storm had strengthened to a Category 2 hurricane by 12:20 p.m. Pacific Daylight Time on July 8, when the Moderate Resolution Imaging Spectroradiometer (MODIS) on NASA’s Terra satellite captured this natural-color image. By that time, Daniel sported a distinct eye characteristic of hurricanes, and its spiral arms spanned hundreds of kilometers over the open ocean.

At 2:00 p.m. PDT on July 8, not long after MODIS acquired this image, the U.S. National Hurricane Center (NHC) reported that Daniel was located roughly 1,120 miles (1,800 kilometers) west-southwest of the southern tip of Baja California. The storm had maximum sustained winds of 105 miles (165 kilometers) per hour.

By the following day, Daniel had weakened, though it remained a hurricane. At 8:00 a.m. PDT on July 9, Daniel had moved farther away from Baja California, and the storm’s wind speeds had dropped to 85 miles (140 kilometers) per hour. No hazards affected land as of July 9, the NHC reported, and Daniel was expected to weaken further as it continued moving westward.

Though the storm posed no threat to Mexico, it had the potential to bring unsettled weather to Hawaii. Daniel’s remnants were expected to pass south of the island chain around July 13, 2012, AccuWeather reported. Remnants of the storm might cause gusty winds, heavy rains, and even localized flash flooding. 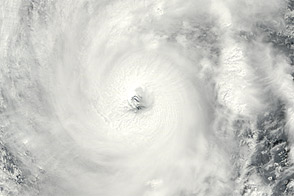