Ship Tracks off the Kamchatka Peninsula 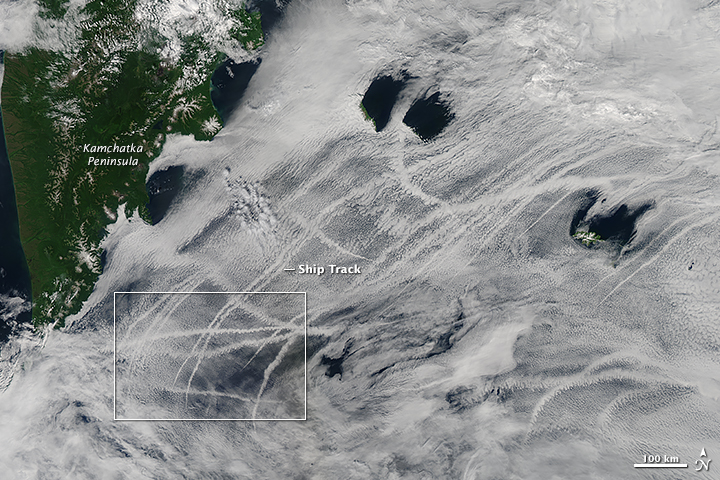 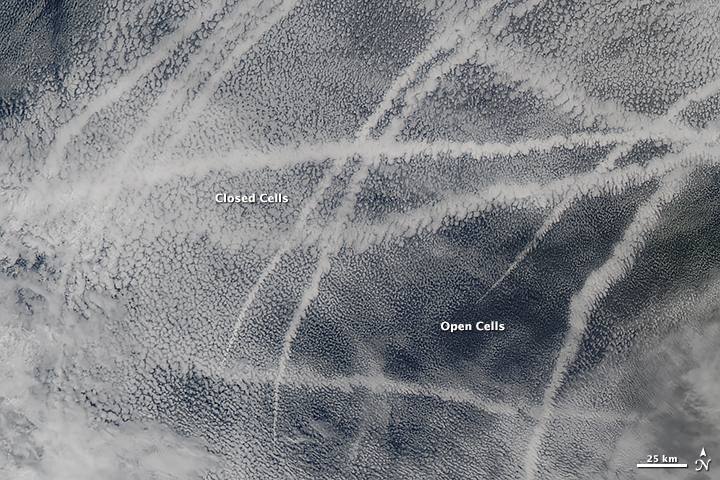 Satellite images of Russia’s Kamchatka Peninsula often focus on the area’s many volcanoes, which frequently spew ash, steam, and aerosol plumes into the atmosphere. In these images, however, the plumes were produced by ships.

Large tankers, container ships, and other vessels emit some pollution particles as exhaust; other aerosol pollutants form indirectly as exhaust gases mix and cool in the atmosphere. Water vapor can then condense around these tiny particles to form long, narrow clouds known as ship tracks.

The Moderate Resolution Imaging Spectroradiometer (MODIS) on NASA’s Aqua satellite acquired these images of ship tracks off the Kamchatka Peninsula on July 27, 2015. In general, the narrower ends of the clouds are younger than the broader ends.

But age is not the only factor affecting the appearance of these narrow clouds. Yi-Chun (Jean) Chen, a scientist at NASA’s Jet Propulsion Laboratory, and colleagues have identified specific atmospheric conditions that affect the brightness, or albedo, of ship tracks. (Albedo is the fraction of sunlight reflected back toward space.)

Chen’s team used data from MODIS and from the Multi-angle Imaging SpectroRadiometer (MISR) on NASA’s Terra satellite to investigate the interplay between ship-emitted aerosols and cloud properties. They found that aerosol plumes increased the cloud amount and albedo significantly in areas with open-cell formations. In contrast, areas with closed-cell conditions were less susceptible to aerosol plumes. The research was published in April 2015 in Journal of Geophysical Research.

Meteorological conditions mattered, too, according to Chen. Ship tracks are generally brighter compared to surrounding clouds. But ship tracks that formed in areas where the air above the clouds was drier and the cloud tops reached higher altitudes tended to have a lower albedo.

A previous study had hinted that ship emissions were not likely to affect climate significantly, but researchers continue to investigate the phenomenon. According to Chen, “Ship tracks provide an ideal natural laboratory for us to investigate the cloud response to ship plumes.”