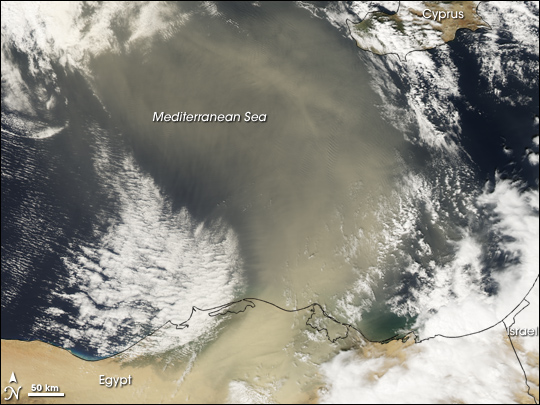 A thick plume of dust blew off the Egyptian coast and over the Mediterranean Sea on April 6, 2008. The Moderate Resolution Imaging Spectroradiometer (MODIS) on NASA’s Aqua satellite took this picture the same day. The dust plume in this image looks like an extension of the Sahara Desert, sweeping off the North African coast over the dark blue water. Unlike an earlier storm, on March 24, this dust storm hides much of the Nile Delta; only traces of the delta’s deep green hues appear around the fringes of the plume. This dust plume seems to squeeze through a corridor created by clouds, making a left turn and heading in a counter-clockwise direction, around a bank of clouds in the west. The relatively heavy cloud cover in the region may result from the same weather system that stirred the dust.

The Sahara Desert stretches over some 4,800 kilometers (3,000 miles), and roughly a quarter of this desert is covered by vast sand seas. In addition to supplying ample material to be blown by winds, the Sahara Desert provides the ideal conditions for such storms to form. As daytime temperatures rise, air near the ground becomes unstable, enabling even light winds to stir dust and raise particles hundreds or even thousands of meters into the air.

Saharan dust can travel not just over the Mediterranean, but thousands of kilometers across the Atlantic. Over the ocean, this dust is a mixed blessing. By providing minerals to the Mediterranean and Black Seas, dust can spur blooms of plant-like marine organisms known as phytoplankton. Although phytoplankton blooms are the base of the food web, overgrowth and decay of phytoplankton and algae can create dead zones where all the dissolved oxygen has been consumed. Likewise, Saharan dust provides soils to Caribbean islands while sometimes causing widespread die-offs in Caribbean corals.