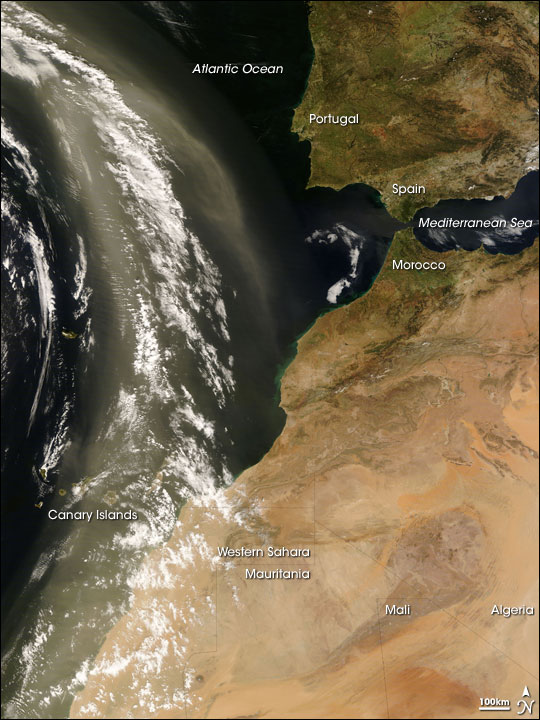 A plume blew off the west coast of northern Africa in early April 2008, continuing an intermittent pattern of dust activity in the region that started the previous month. The Moderate Resolution Imaging Spectroradiometer (MODIS) on NASA’s Terra satellite captured this image on April 4, 2008. In this image, dust plumes blow northward in a slightly counter-clockwise direction, mingling with clouds over the Atlantic. The dust extends northward from the African coast, south of Western Sahara, dusting the Canary Islands en route. Skies over Morocco, the Mediterranean Sea, and the Iberian Peninsula, however, are largely clear.

Africa’s Sahara Desert stretches across some 4,800 kilmeters (3,000 miles), and a fourth of the desert is covered by sand seas. As the Sahara’s daytime temperatures rise, air near the ground becomes unstable, enabling even light winds to stir dust and raise particles hundreds or even thousands of meters into the air. Dust storms from the Sahara provide minerals to the Mediterranean and Black Seas; sometimes causing blooms of plant-like marine organisms known as phytoplankton. While phytoplankton act as the base of the food web, overgrowth and decay of phytoplankton and algae can create dead zones where all the dissolved oxygen has been consumed. Farther away, Saharan dust sometimes damages Caribbean corals while providing soil for Caribbean islands.

In late March 2008, Saharan dust blew off the west coast of Africa over the Atlantic Ocean. Dust plume activity continued in April.