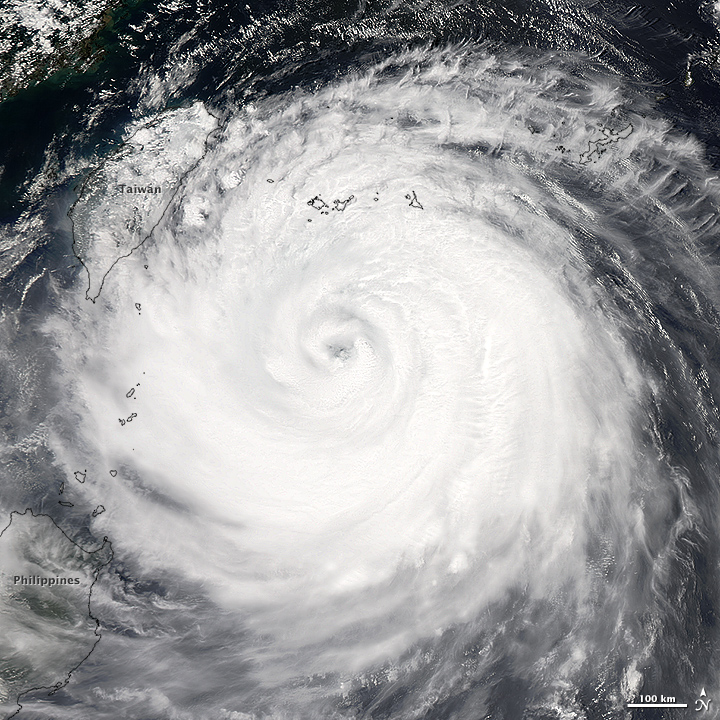 After a period of rapid intensification on August 1, Typhoon Soudelor became the sixth category 5 storm of 2015. While the typhoon weakened during the ensuing days, it was poised to make landfall in central Taiwan on August 8 as a category 3 storm. Forecasters expect much of the northern half of Taiwan to face sustained winds of 160 kilometers (100 miles) per hour. Rainfall totals in some areas could approach 1 meter (3 feet), which has raised concerns about dangerous flooding and mudslides.

At 04:40 UTC (12:40 p.m. local time) on August 7, 2015, the Moderate Resolution Imaging Spectroradiometer (MODIS) on NASA’s Aqua satellite acquired this image of the storm approaching Taiwan. This island is no stranger to tropical cyclones, as an average of 3.5 typhoons make landfall or cause significant damage there each year, noted meteorologist Bob Henson. In 2009, slow-moving Typhoon Morakot caused 450 deaths and billions of dollars of damage. 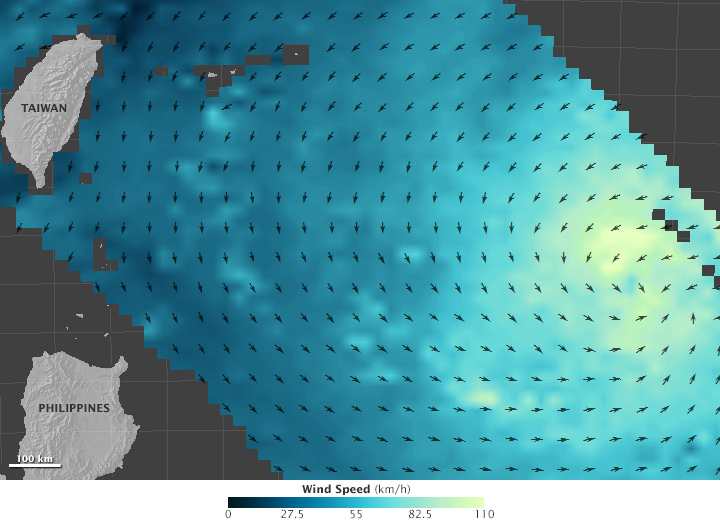 As Soudelor made its approach, scientists had an opportunity to observe the storm’s wind field with the International Space Station-Rapid Scatterometer (ISS-RapidScat). The instrument, which joined NASA’s Earth observing fleet in September 2014, measures ocean surface wind speed and direction.

The map above was generated from data acquired by RapidScat as Soudelor approached Taiwan on August 5, 2015. Arrows represent the direction of near-surface winds. Shades of blue indicate the range of wind speeds (lighter blue and green represent faster-moving winds). While the storm’s estimated sustained winds reached 290 kilometers (180 miles) per hour on August 1, top winds had dropped to about 110 kilometers per hour when RapidScat observed the storm.

RapidScat does not measure wind speed and direction directly. Instead, microwave pulses from the instrument reflect off the ocean surface and back toward the sensor. Rough waters—those disturbed more by wind—return a stronger signal than smooth waters. From that information, scientists can derive wind speed, as well as its direction based on the position of the waves. The nature of this measurement method means that RapidScat is describing the winds close to the ocean’s surface—useful information for weather forecasting and climate studies. Higher up in a storm, winds can be even faster. At altitudes above about 500 to 1,000 meters (1,600 to 3,300 feet), winds no longer are no longer affected by friction from the surface.

The Japan Meteorological Agency also collected images of Soudelor. The clip above, acquired by Himawari-8, shows the storm moving westward between 19:00 Universal Time (UTC) on August 5 and 16:00 UTC on August 6. Individual images were captured 30 minutes apart by the Advanced Himawari Imager. Himawari-8 is a geostationary weather satellite that was launched from Tanegashima Space Center in October 2014. 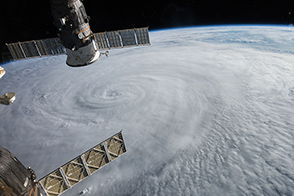