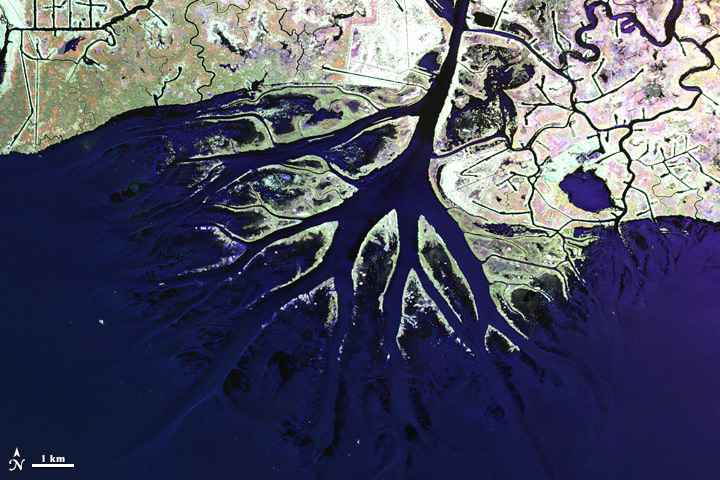 Researchers recently completed an intensive study of levees and wetlands along the Louisiana coast, making measurements with three advanced imaging instruments mounted on NASA research aircraft. NASA makes several aerial survey flights over the Gulf Coast each year in order to keep consistent records of ground subsidence—the gradual sinking of a patch of land—which can compromise the integrity of roads, buildings, and levee systems.

Scientists also closely monitor vegetation changes in the coastal wetlands to better understand how to preserve them. The marshes are both delicate and fertile ecosystems, as well as natural barriers between land and sea. During storms and hurricanes, wetlands slow the surge of seawater before it reaches more heavily developed inland areas. However, as wetlands become saturated due to rising sea levels, the vegetation within them dies and the protection provided by these barriers is reduced or lost.

On May 5, 2015, the Uninhabited Aerial Vehicle Synthetic Aperture Radar (UAVSAR) instrument acquired the data for the polarimetric images at the top of this page. The image shows Wax Lake delta in Louisiana, one of the few places in the world where deltas are growing naturally. Note how the channels through the land appear to extend underwater, beyond the islands and lobes that stand above the water line.

UAVSAR is an imaging radar designed to measure changes that occur on the landscape—uplift, subsidence, disturbance—between repeat flights over the same path. In a natural color image, such as the MODIS or Landsat images often shown on Earth Observatory, colors represent different frequencies of light reflected by the surface. In the radar images on this page, the colors represent the polarization of the radar waves (the direction of the electric field in the waves) as they are transmitted and reflected off of the landscape. Researchers look for changes in those reflections in order to figure out where land has shifted or has been disturbed by human activity.

In addition to the UAVSAR, the NASA research flights collected data with the Next-Generation Airborne Visible/Infrared Imaging Spectrometer (AVIRISng ), which can characterize changes in Earth’s surface by observing changes in how it reflects light. Scientists also used the Air Surface Water and Ocean Topography (AirSWOT ) instrument, a prototype of a precision radar instrument that will eventually observe Earth’s water surfaces from space. The instruments were mounted and flown on C-20A and B200 King Air research aircraft based out of NASA’s Armstrong Flight Research Center.

“This is a great opportunity to use instruments that work together to create a more complete picture of the changing Louisiana delta,” said Randall Friedl, manager of the Earth System Science Formulation Office at NASA’s Jet Propulsion Laboratory. All three instruments were developed at JPL. The data are being provided to federal and state agencies that manage wetlands, and also will be used by NASA scientists to improve modeling of land building and loss in river deltas.