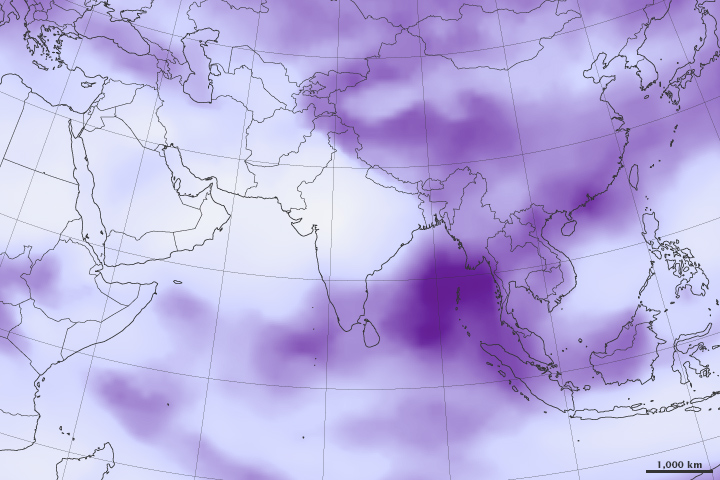 May is generally the hottest month in India, but even by local standards May 2015 was unusual. For nearly two weeks, many areas faced temperatures that were 5.5 degrees Celsius (10 degrees Fahrenheit) above normal. By June 4, the extreme weather had claimed the lives of more than 2,500 people, according to news reports. That put the heat wave among the five deadliest on record. Many of the victims were elderly, homeless, or construction workers.

By observing outgoing longwave radiation, the Clouds and Earth’s Radiant Energy System (CERES) sensor on NASA’s Terra satellite offers a different view of the intensity and breadth of the heat wave. Outgoing long wave radiation is a measure of the amount of energy emitted to space by Earth’s surface, oceans, and atmosphere. The hotter an area is, the more energy it radiates. This false-color map shows how much outgoing radiation left Earth’s atmosphere between May 15 and May 27. The amount of heat energy radiated (in watts per square meter) is depicted in shades of purple. Light purple areas emitted the most longwave radiation and were the warmest. Darker purple areas emitted less radiation and were cooler.

As observed by CERES, the hot weather was not limited to India. Pakistan, southern Iran, the United Arab Emirates, and Oman also faced extremely hot temperatures. On some days, it was even hotter in parts of Pakistan than it was in India, according to news reports. On June 3, temperatures soared to 50.7 degrees Celsius (123.3 degrees Farenheit) in Sweihan, a town in the United Arab Emirates.

Part of the reason the death toll has been so high in India is because of the humidity. Many of the deaths occurred in Andhra Pradesh and Telangana, states in southern India that faced extremely high humidity as well as extreme temperatures. High humidity increases the heat index and makes temperatures feel even warmer. Humidity plays a critical role in deadly heat waves because the human body relies on sweat to cool itself. If humidity gets too high, sweat cannot evaporate efficiently and the body begins to overheat.

In addition, medical experts say the abrupt onset of the heat wave likely contributed to the high death toll in India. Much of the country saw unseasonable rainfall in April and in the first few weeks of May. Those rains kept temperatures relatively cool, so people had little time to acclimate to the heat once it arrived. Heat acclimation—the subtle hormonal and metabolic changes that make it easier for the body to cope with heat—is a gradual process that occurs over a few weeks of exposure to progressively higher temperatures. People who have had enough time to acclimate tend to sweat more, sweat at lower temperatures, and distribute blood to their organs more efficiently.